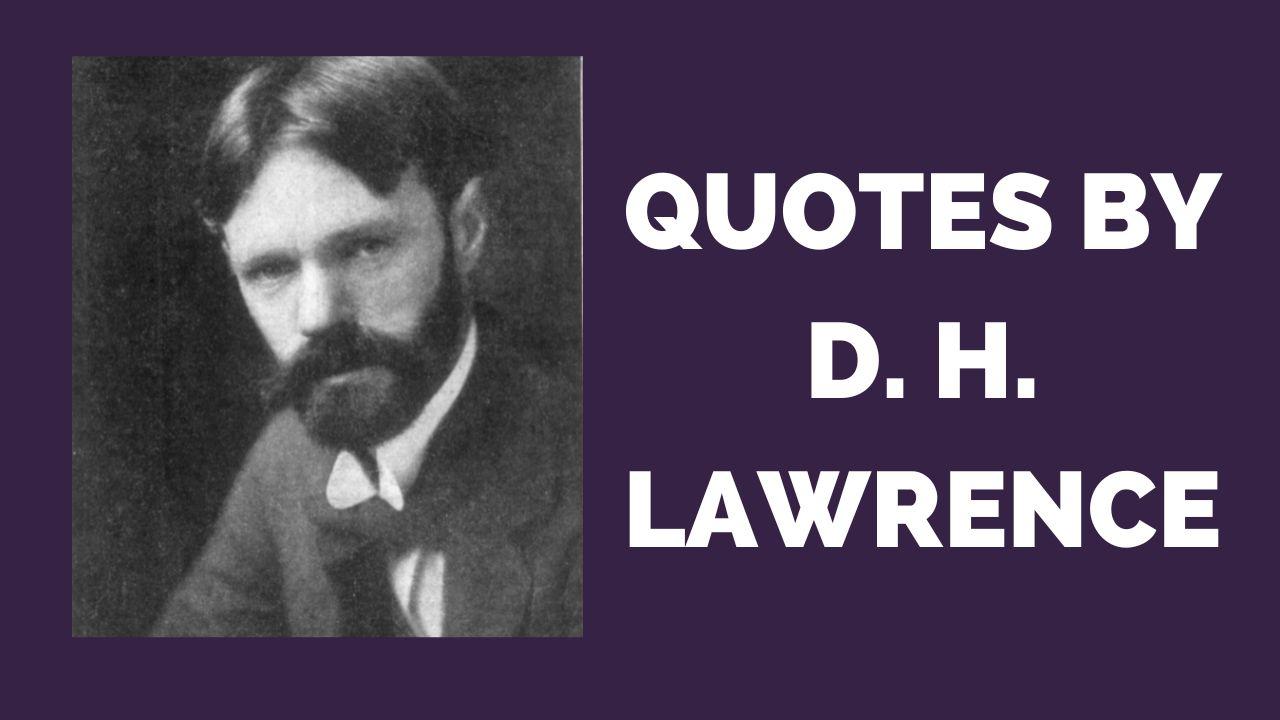 This collection of quotes by D. H. Lawrence offers an insight into the life and mind of one of the most influential writers of the 20th century.

D.H. Lawrence was an English writer and poet best known for his acclaimed novel “Lady Chatterley’s Lover.” He was born on September 11, 1885 in Eastwood, Nottinghamshire and died on March 2, 1930 in Vence, France.

D.H. Lawrence (David Herbert Lawrence) wrote novels, plays, poetry, essays and more during his lifetime. He is remembered for his groundbreaking use of language as a literary device to explore human relationships and the natural world.

Due to the success of his novel “Lady Chatterley’s Lover,” Lawrence is often thought of as a pioneer of sexual freedom and feminism. His quotes reflect his views on topics ranging from love to war. Here are 10 inspiring D.H. Lawrence quotes:

Be still when you have nothing to say; when genuine passion moves you, say what you’ve got to say, and say it hot.

This is what I believe: That I am I. That my soul is a dark forest. That my known self will never be more than a little clearing in the forest. That gods, strange gods, come forth from the forest into the clearing of my known self, and then go back. That I must have the courage to let them come and go. That I will never let mankind put anything over me, but that I will try always to recognize and submit to the gods in me and the gods in other men and women. There is my creed.

Money is our madness, our vast collective madness.

All that we know is nothing, we are merely crammed wastepaper baskets, unless we are in touch with that which laughs at all our knowing.

I believe that a man is converted when first he hears the low, vast murmur of life, of human life, troubling his hitherto unconscious self.

It is a fine thing to establish one’s own religion in one’s heart, not to be dependent on tradition and second-hand ideals. Life will seem to you, later, not a lesser, but a greater thing.

Love is the flower of life, and blossoms unexpectedly and without law, and must be plucked where it is found, and enjoyed for the brief hour of its duration.

Ours is an excessively conscious age. We know so much, we feel so little.

One must learn to love, and go through a good deal of suffering to get to it, and the journey is always towards the other soul

One sheds one’s sicknesses in books—repeats and presents again one’s emotions, to be master of them.

For man, as for flower and beast and bird, the supreme triumph is to be most vividly, most perfectly alive.

Do not allow to slip away from you freedoms the people who came before you won with such hard knocks.

Love is never a fulfillment. Life is never a thing of continuous bliss. There is no paradise. Fight and laugh and feel bitter and feel bliss: and fight again. Fight, fight. That is life.

Death is the only pure, beautiful conclusion of a great passion.

The tragedy is when you’ve got sex in the head instead of down where it belongs.

Freedom is a very great reality, but it means above all things, freedom from lies.

The great home of the soul is the open road.

Perhaps in Venice you’ll find a man who’ll put jasmine in your maiden-hair, and a pomegranate flower in your navel. Poor little lady Jane!

Put thy shimmy on, Lady Chatterley!

Be a good animal, true to your instincts.

Sex is just another form of talk, where you act the words instead of saying them.

My God, these folks don’t know how to love — that’s why they love so easily.

Pornography is the attempt to insult sex, to do dirt on it.

A woman has to live her life, or live to repent not having lived it.

We’ve got to live, no matter how many skies have fallen.

She was always waiting, it seemed to be her forte.

Life is ours to be spent, not to be saved.

The more scholastically educated a man is generally, the more he is an emotional boor.

But better die than live mechanically a life that is a repetition of repetitions.

It’s the man who dares to take, who is independent, not he who gives.

For my part, I prefer my heart to be broken. It is so lovely, dawn-kaleidoscopic within the crack.

A woman unsatisfied must have luxuries. But a woman who loves a man would sleep on a board.

I love trying things and discovering how I hate them.

I want to live my life so that my nights are not full of regrets.

Those that go searching for love only make manifest their own lovelessness, and the loveless never find love, only the loving find love, and they never have to seek for it.

The essential American soul is hard, isolate, stoic, and a killer. It has never yet melted.

What the eye doesn’t see and the mind doesn’t know, doesn’t exist.

If a woman hasn’t got a tiny streak of harlot in her, she’s a dry stick as a rule.

When I read Shakespeare I am struck with wonder that such trivial people should muse and thunder in such lovely language.

“It’s terrible, once you’ve got a man into your blood!” she said.

The human being is a most curious creature. He thinks he has got one soul, and he has got dozens.

Men fight for liberty and win it with hard knocks. Their children, brought up easy, let it slip away again, poor fools. And their grandchildren are once more slaves.

The only principle I can see in this life, is that one must forfeit the less for the greater.

Perhaps only people who are capable of real togetherness have that look of being alone in the universe. The others have a certain stickiness, they stick to the mass.

There is no such thing as liberty. You only change one sort of domination for another. All we can do is to choose our master.

Vitally, the human race is dying. It is like a great uprooted tree, with its roots in the air. We must plant ourselves again in the universe.

Tragedy is like strong acid – it dissolves away all but the very gold of truth.

This is the very worst wickedness, that we refuse to acknowledge the passionate evil that is in us. This makes us secret and rotten.

You’ll never succeed in idealizing hard work. Before you can dig mother earth you’ve got to take off your ideal jacket. The harder a man works, at brute labor, the thinner becomes his idealism, the darker his mind.

It’s bad taste to be wise all the time, like being at a perpetual funeral.

Sex is really only touch, the closest of all touch. And it’s touch we’re afraid of.

No man is a man unless to his woman he is a pioneer.

It’s better to be born lucky than rich. If you’re rich, you may lose your money, but if you’re born lucky, you will always have more money.

The fairest thing in nature, a flower, still has its roots in earth and manure.

As we all know, too much of any divine thing is destruction