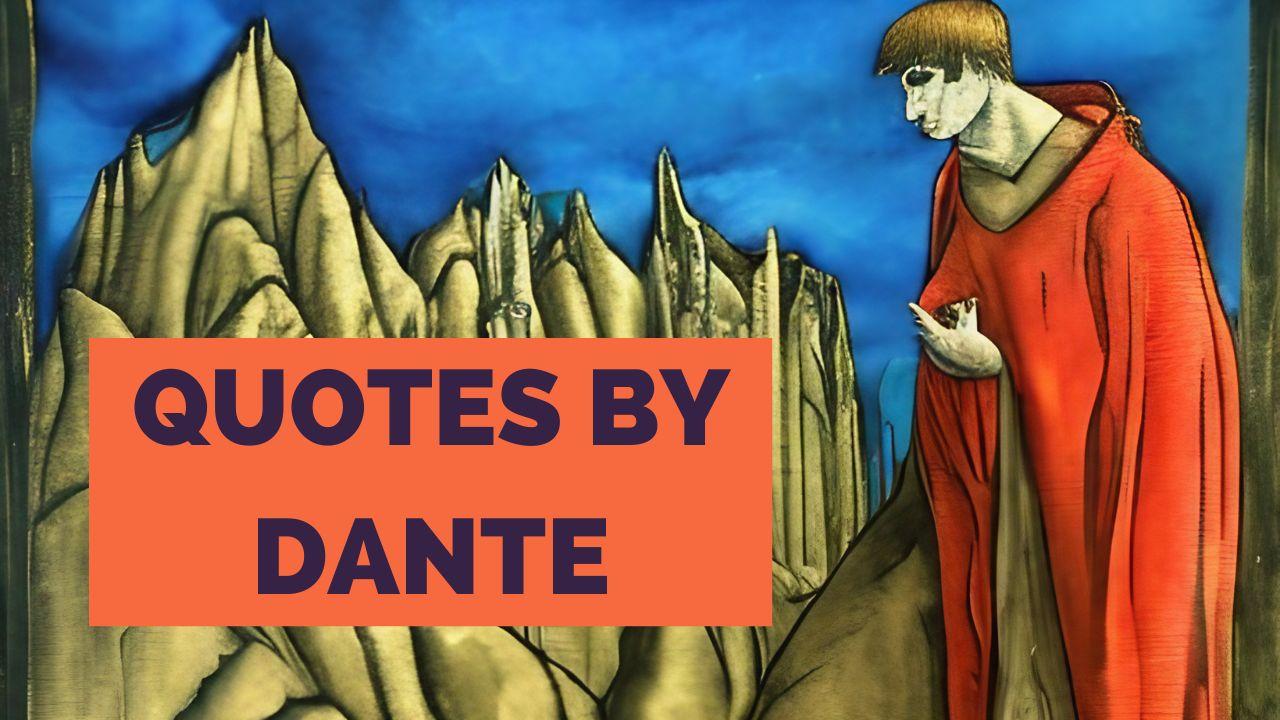 This collection of quotes by Dante Alighieri comes mainly from his major work the Divine Comedy, which is often called one of the greatest works of literature ever written. These quotes range from themes such as love, justice, and politics to death, heaven and hell.

Dante Alighieri was an Italian poet of the Late Middle Ages. He was born in 1265 and died in 1321.

Dante is best known for his epic poem The Divine Comedy, which has been translated into numerous languages and remains a classic of world literature.

The Divine Comedy is a 3-part epic poem, and follows Dante’s journey through Hell, Purgatory, and Heaven – guided by the ancient Roman poet Virgil – as he searches for redemption and salvation. Along his path, Dante meets many people from classical antiquity, learns about Christian theology, and struggles with moral choices. The poem is written in the vernacular language of Italian, rather than Latin.

As Dante’s works were originally written in Italian, many of his quotes have slightly different translations in English.

It’s also led to some paraphrasing and misquotes. For example, one of John F. Kennedy’s favourite quotes was:

The hottest places in Hell are reserved for those who in time of moral crisis preserve their neutrality.

Even this quote has a variation, which is:

The hottest places in hell are reserved for those who, in time of great moral crisis, maintain their neutrality

Dante never actually said either version of course, but the essence of this quote could be inferred from the third canto of ‘Inferno’.

Perhaps the best known quote by Dante Alighieri is:

The path to paradise begins in hell

But there are also many other worthy quotes from Dante that offer insight into his life and works:

O human race, born to fly upward, wherefore at a little wind dost thou so fall?

Thy soul is by vile fear assail’d, which oft So overcasts a man, that he recoils From noblest resolution, like a beast At some false semblance in the twilight gloom.

The man who lies asleep will never waken fame, and his desire and all his life drift past him like a dream, and the traces of his memory fade from time like smoke in air, or ripples on a stream 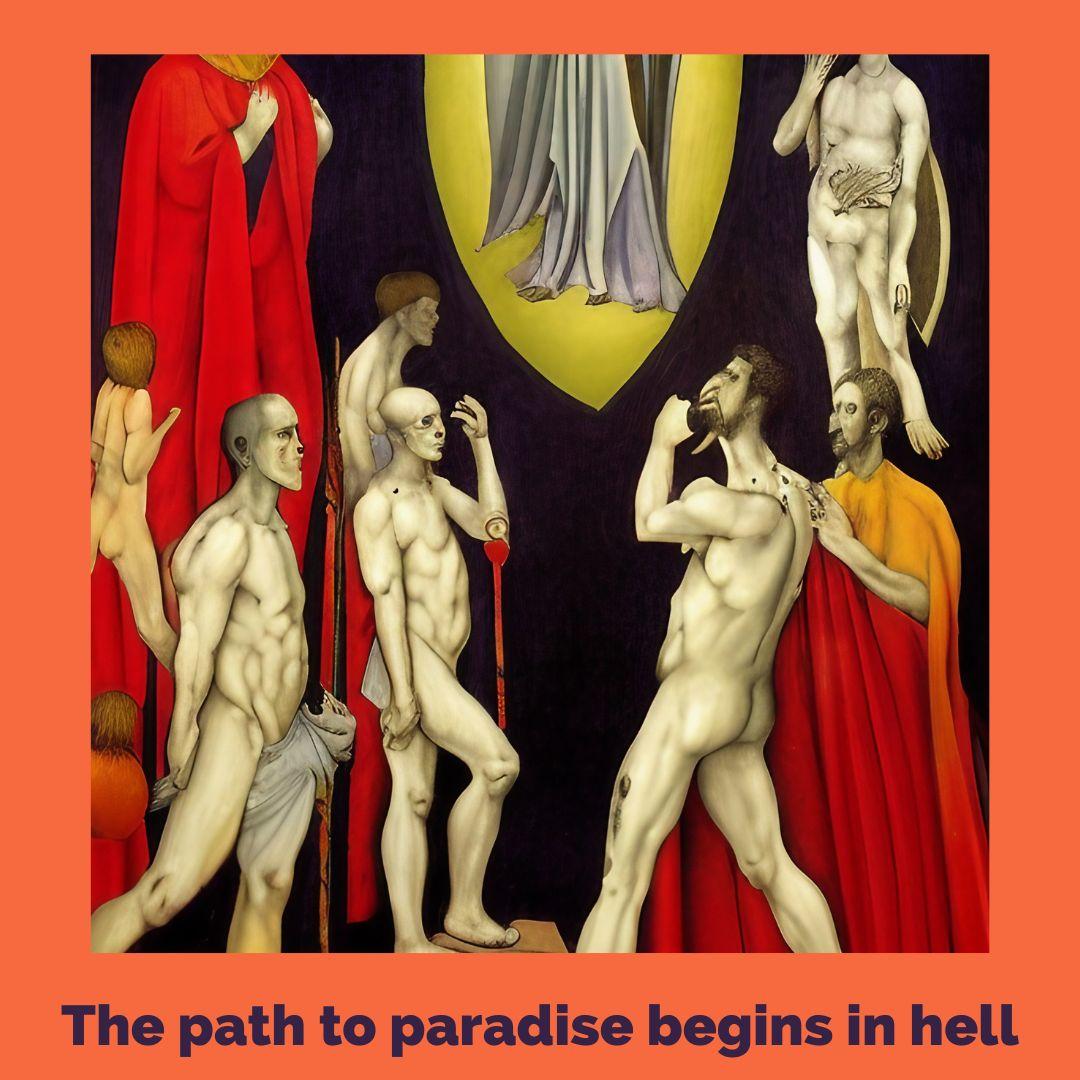 But the stars that marked our starting fall away. We must go deeper into greater pain, for it is not permitted that we stay.

As little flowers, which the chill of night has bent and huddled, when the white sun strikes, grow straight and open fully on their stems, so did I, too, with my exhausted force.

Heaven wheels above you, displaying to you her eternal glories, and still your eyes are on the ground

Midway upon the journey of our life, I found myself within a forest dark, for the straightforward pathway had been lost

The more perfect a thing is, the more susceptible to good and bad treatment it is.

It is necessity and not pleasure that compels us.

The poets leave hell and again behold the stars

There is no greater sorrow than to recall happiness in times of misery.

In the middle of the journey of our life I found myself within a dark woods where the straight way was lost.

At grief so deep the tongue must wag in vain; the language of our sense and memory lacks the vocabulary of such pain.

Do not be afraid; our fate cannot be taken from us; it is a gift.

Love insists the loved loves back.

My course is set for an uncharted sea.

Abandon all hope, you who enter here.

The devil is not as black as he is painted.

I have come to lead you to the other shore; into eternal darkness; into fire and into ice.

To be rude to him was courtesy.

Remember tonight… for it is the beginning of always.

We are those who painted the world red with our sin.

Nature is the art of God.

Against a better will the will fights ill.

He listens well who takes notes.

As the thing more perfect is, the more it feels of pleasure and of pain.

Heaven, to keep its beauty, cast them out, but even Hell itself would not receive them for fear the wicked there might glory over them.

Consider your origin. You were not formed to live like brutes, but to follow virtue and knowledge.

In each fire there is a spirit; Each one is wrapped in what is burning him.

People who love Dante’s work have asked questions such as:

What is the famous quote from Dante’s Inferno?

What is the most famous line of Divine Comedy?

A famous line is: ‘Before me things create were none, save things Eternal, and eternal I endure. All hope abandon ye who enter here.’

What are two well known quotes from The Divine Comedy?

Two famous quotes are: ‘The devil is not as black as he is painted’, and ‘Before me things create were none, save things Eternal, and eternal I endure’.