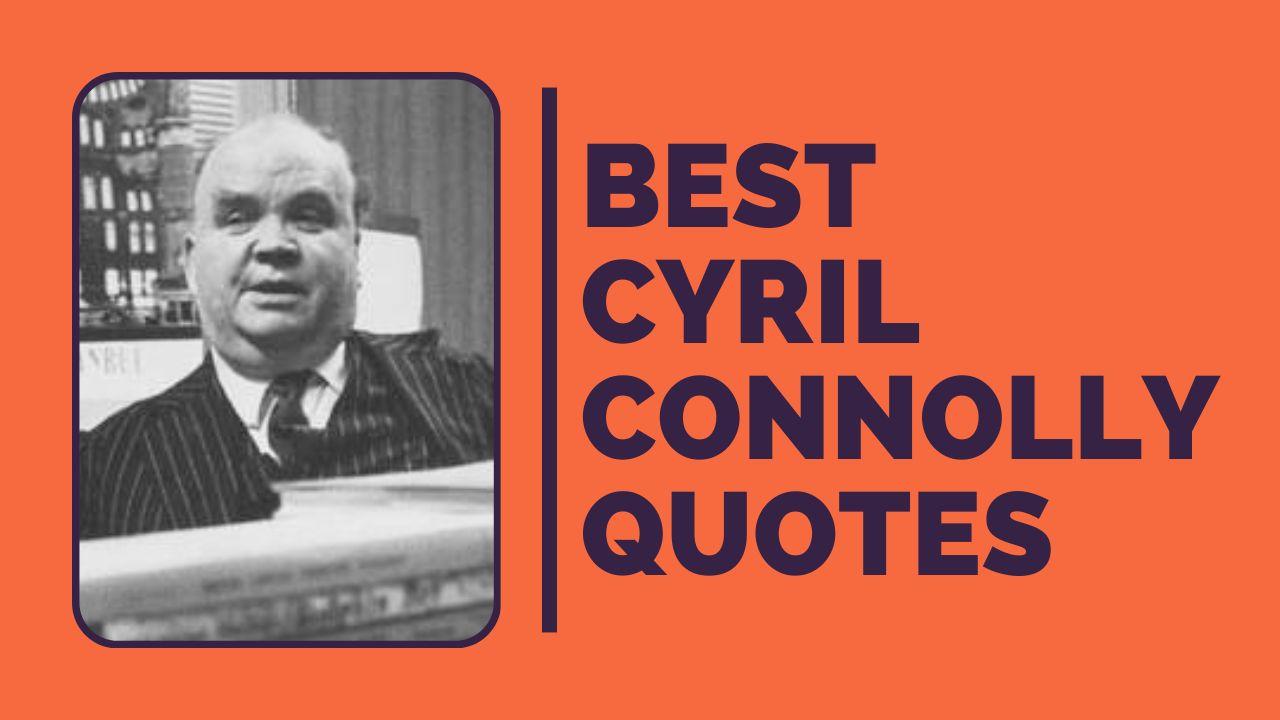 Cyril Connolly was an English writer, critic and journalist. He was a prolific author of books and articles, most notably the 1953 book The Unquiet Grave written under a pseudonym. In addition to his work as a journalist and critic, Connolly also edited several anthologies, including Horizon, a British literary magazine that he founded in 1939.

Here’s a collection of some of the most quoted thoughts and phrases from Cyril Connolly:

If our elaborate and dominating bodies are given us to be denied at every turn, if our nature is always wrong and wicked, how ineffectual we are – like fishes not meant to swim

Beneath a mask of selfish tranquility nothing exists except bitterness and boredom. I am one of those whom suffering has made empty and frivolous: each night in my dreams I pull the scab off a wound; each day, vacuous and habit-ridden, I help it re-form.

A great writer creates a world of his own and his readers are proud to live in it. A lesser writer may entice them in for a moment, but soon he will watch them filing out.

A stone lies in a river; a piece of wood is jammed against it; dead leaves, drifting logs, and branches caked with mud collect; weeds settle there, and soon birds have made a nest and are feeding their young among the blossoming water plants. Then the river rises and the earth is washed away. The birds depart, the flowers wither, the branches are dislodged and drift downward; no trace is left of the floating island but a stone submerged by the water; — such is our personality.

The river of truth is always splitting up into arms that reunite. Islanded between them, the inhabitants argue for a lifetime as to which is the mainstream.

There is no hate without fear. Hate is crystallized fear, fear’s dividend, fear objectivized. We hate what we fear and so where hate is, fear will be lurking.

Melancholy and remorse form the deep leaden keel which enables us to sail into the wind of reality; we run aground sooner than the flat-bottomed pleasure-lovers but we venture out in weather that would sink them and we choose our direction.

Hate is the consequence of fear; we fear something before we hate; a child who fears noises becomes the man who hates them.

There are many who dare not kill themselves for fear of what the neighbours will say.

We love but once, for once only are we perfectly equipped for loving.

Whom the Gods wish to destroy, they first call promising.

Literature is the art of writing something that will be read twice; journalism what will be grasped at once, and they require separate techniques.

Life is a maze in which we take the wrong turning before we have learnt to walk.

No city should be too large for a man to walk out of in a morning.

Everything is a dangerous drug to me except reality, which is unendurable.

Imprisoned in every fat man a thin one is wildly signaling to be let out.

Peace … is a morbid condition, due to a surplus of civilians, which war seeks to remedy.

All charming people have something to conceal, usually their total dependence on the appreciation of others.

Vulgarity is the garlic in the salad of taste.