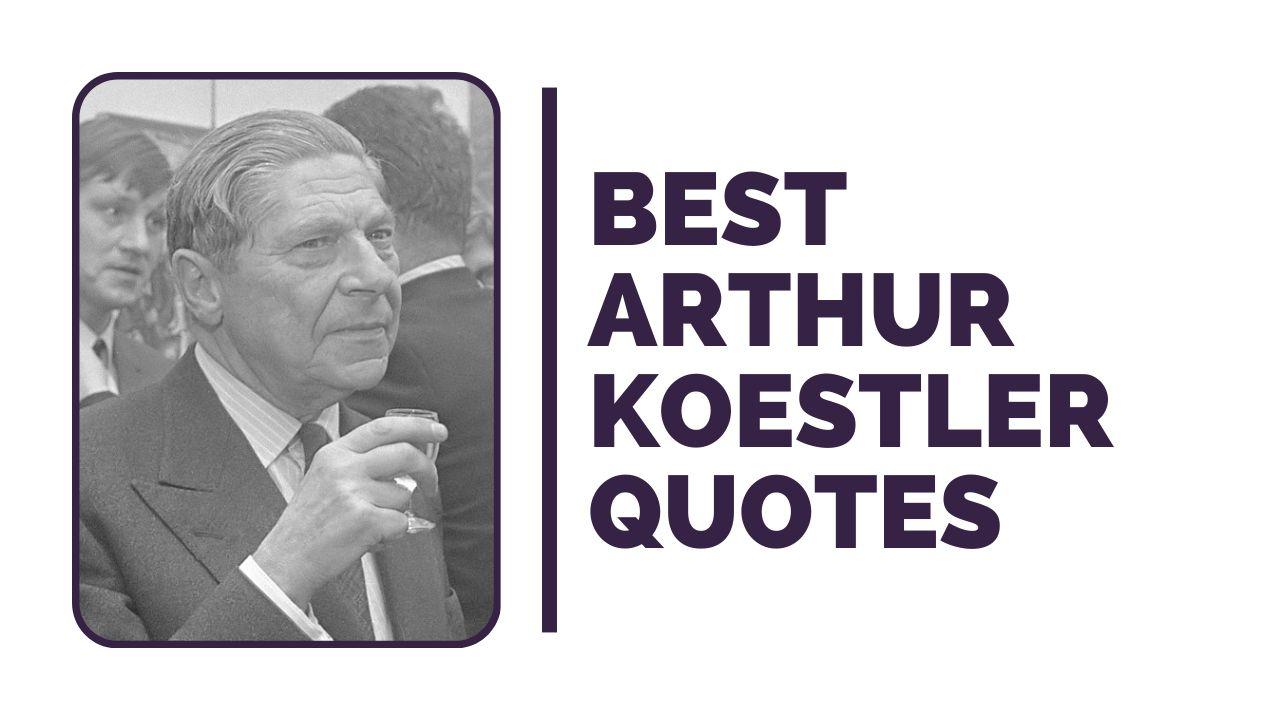 Arthur Koestler was a 20th-century novelist, philosopher, and journalist. He is best known for his novel Darkness at Noon. Here are some of his most quoted words and thoughts.

Arthur Koestler was a prolific writer and thinker who made significant contributions to our understanding of political ideology and human behavior. He will be remembered as one of the most important authors of the 20th century.

The principle that the end justifies the means is and remains the only rule of political ethics; anything else is just a vague chatter and melts away between one’s fingers.

Two half truths do not make a truth.

The prerequisite of originality is the art of forgetting, at the proper moment, what we know.

Scientists are peeping toms at the keyhole of eternity.

A writer’s ambition should be to trade a hundred contemporary readers for ten readers in ten years’ time and for one reader in a hundred years’ time.

Men cannot be treated as units in operations of political arithmetic because they behave like the symbols for zero and the infinite, which dislocate all mathematical operations.

The new frontiers to be conquered are mainly in the convolutions of the cortex.

Newton’s apple and Cezanne’s apple are discoveries more closely related than they seem.

The more original a discovery the more obvious it seems afterwards.

The ‘gallows’ are not only a symbol of death, but also a symbol of cruelty, terror and irreverence for life; the common denominator of primitive savagery, medieval fanaticism and modern totalitarianism.

Some of the greatest discoveries…consist mainly in the clearing away of psychological roadblocks which obstruct the approach to reality; which is why, post factum they appear so obvious.

If one looks with a cold eye at the mess man has made of history, it is difficult to avoid the conclusion that he has been afflicted by some built-in mental disorder which drives him towards self-destruction.

The evolution of the brain not only overshot the needs of prehistoric man, it is the only example of evolution providing a species with an organ which it does not know how to use.

The sixth pre-Christian century—the miraculous century of Buddha, Confucius and Lâo-Tse, of the Ionian philosophers and Pythagoras—was a turning point for the human species. A March breeze seemed to blow across the planet from China to Samos.

We find in the history of ideas mutations which do not seem to correspond to any obvious need, and at first sight appear as mere playful whimsies — such as Apollonius’ work on conic sections, or the non-Euclidean geometries, whose practical value became apparent only later.

The evils of mankind are caused, not by the primary aggressiveness of individuals, but by their self-transcending identification with groups whose common denominator is low intelligence and high emotionality.

Courage is never to let your actions be influenced by your fears.

Creativity is a type of learning process where the teacher and pupil are located in the same individual.

The principle mark of genius is not perfection but originality, the opening of new frontiers.

Nothing is more sad than the death of an illusion.

Brain-washing starts in the cradle.

The creative act does not create something out of nothing; it uncovers, selects, reshuffles, combines, synthesizes already existing facts, ideas, faculties, and skills.

Faith is a wondrous thing; it is not only capable of moving mountains, but also of making you believe that a herring is a race horse.

Aggressiveness is not the main trouble with the human species, but rather an excess capacity for fanatical devotion.

War is a ritual, a deadly ritual, not the result of aggressive self-assertion, but of self-transcending identification. Without loyalty to tribe, church, flag or ideal, there would be no wars.

History had a slow pulse; man counted in years, history in generations.

When all is said, England’s atmosphere still contains fewer germs of aggression and brutality per cubic foot in a crowded bus, pub or queue than in any other country in which I have lived

The Revolutionary’s Utopia, which in appearance represents a complete break with the past, is always modeled on some image of the Lost Paradise, of a legendary Golden Age… All utopias are fed from the source of mythology; the social engineers’ blueprints are merely revised editions of the ancient text.

The jester is brother to the sage.

Habit is the denial of creativity and the negation of freedom; a self-imposed straitjacket of which the wearer is unaware.

Space-ships and time machines are no escape from the human condition.

Nobody before the Pythagoreans had thought that mathematical relations held the secret of the universe. 25 centuries later, Europe is still blessed and cursed with their heritage. To non-European civilizations, the idea that numbers are the key to both wisdom and power, seems never to have occurred.

The fact is: I no longer believe in my own infallibility. That is why I am lost.

Innovation is a twofold threat to academic mediocrities: it endangers their oracular authority, and it evokes the deeper fear that their whole, laboriously constructed intellectual edifice might collapse.

The temptations of God were always more dangerous for mankind than those of Satan.

The definition of the individual was: a multitude of one million divided by one million.

Wherever we find orderly, stable systems in Nature, we find that they are hierarchically structured, for the simple reason that without such structuring of complex systems into sub-assemblies, there could be no order and stability- except the order of a dead universe filled with a uniformly distributed gas.

Adolescence is a kind of emotional seasickness. Both are funny, but only in retrospect.

The discoveries of yesterday are the truisms of tomorrow, because we can add to our knowledge but cannot subtract from it.

A publisher who writes is like a cow in a milk bar.

As modern physics started with the Newtonian revolution, so modern philosophy starts with what one might call the Cartesian Catastrophe. The catastrophe consisted in the splitting up of the world into the realms of matter and mind, and the identification of “mind” with conscious thinking.

I went to Communism as one goes to a spring of fresh water, and I left Communism as one clambers out of a poisoned river strewn with the wreckage of flooded cities and the corpses of the drowned.

Language can become a screen which stands between the thinker and reality. This is the reason why true creativity often starts where language ends.

You might also want to read some more quotes from these other famous authors and novelists:

Most Quoted has hundreds of collections of sayings and citations from the most quoted philosophers, writers, artists and thinkers. In addition to this collection of Arthur Koestler quotes, you will find many more quotes lists and collections on this site.