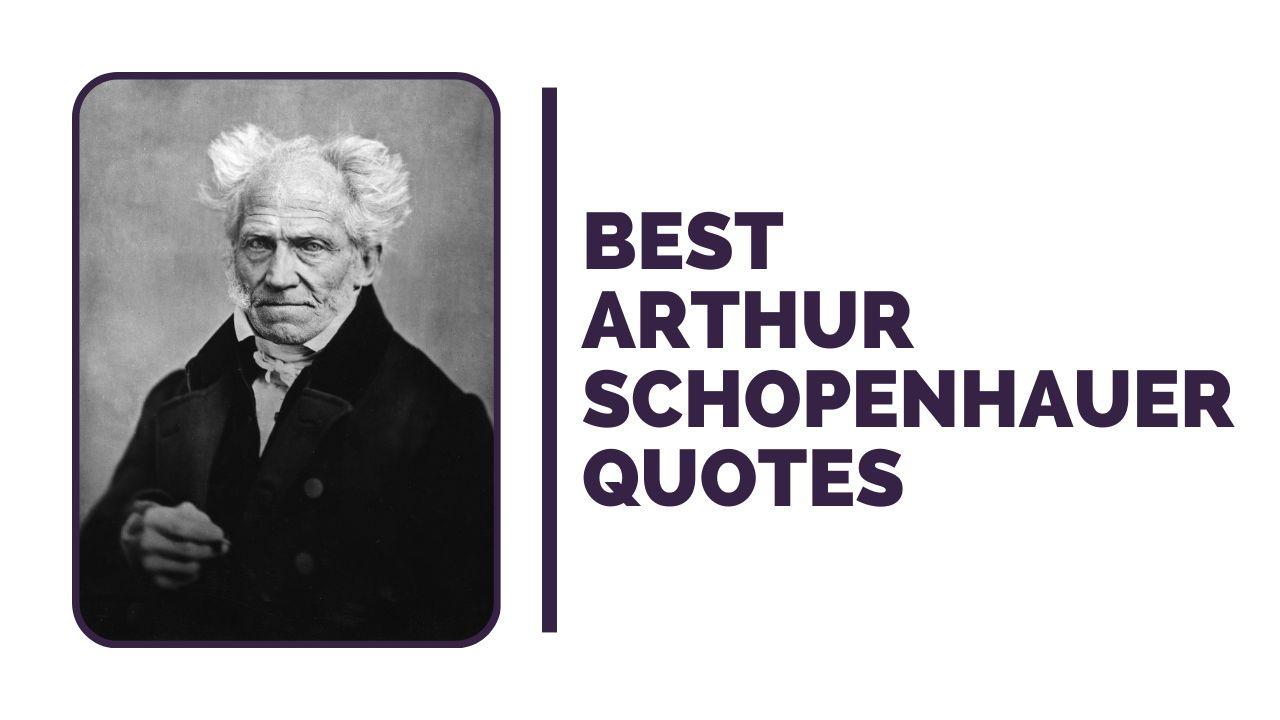 Arthur Schopenhauer was a famous German philosopher who is best known for “The World as Will and Representation.” Here’s some of his most quoted words an philosophies.

Arthur Schopenhauer was a German philosopher who is best known for his work The World as Will and Representation. In this work, Schopenhauer argues that the world is will, or a striving force, rather than being represented by the intellect. This was a radical idea at the time and has since had a lasting impact on philosophy and literature.

This philosophical idea had a significant influence on thinkers like Friedrich Nietzsche and Ludwig Wittgenstein. Today, Schopenhauer is widely considered to be one of the most important philosophers of the 19th century.

He’s also been called the Philosopher of Pessimism!

The World as Will and Representation

In The World as Will and Representation, Schopenhauer argues that the world is will or energy and that our perceptions of the world are mere representations of that will. He further argues that our desires are what cause us suffering because we can never fully satisfy them. Suffering can only be alleviated by recognizing the illusory nature of our desires and ceasing to desire anything at all.

Arthur Schopenhauer is often thought to be the first western philosopher to have been influenced by eastern thinking, and in particular Buddhism.

“Without will there is no concept and no world. Before us, certainly, nothing remains. But what resists this transition into annihilation, our nature, is only that same wish to live — Wille zum Leben — which forms ourselves as well as our world. That we are so afraid of annihilation or, what is the same thing, that we so wish to live, merely means that we are ourselves nothing else but this desire to live, and know nothing but it. And so what remains after the complete annihilation of the will, for us who are so full of the will, is, of course, nothing; but on the other hand, for those in whom the will has turned and renounced itself, this so real world of ours with all its suns and milky way is nothing.”

In this Arthur Schopenhauer quote collection, you’ll find an amazing amount of inspiring and thoughtful observations on the world.

All truth passes through three stages. First, it is ridiculed. Second, it is violently opposed. Third, it is accepted as being self-evident.

Truth that is naked is the most beautiful, and the simpler its expression the deeper is the impression it makes

A man can be himself only so long as he is alone.

After your death, you will be what you were before your birth.

Any foolish boy can stamp on a beetle, but all the professors in the world cannot make a beetle.

For the world is Hell, and men are on the one hand the tormented souls and on the other the devils in it.

We forfeit three-fourths of ourselves in order to be like other people.

The more unintelligent a man is, the less mysterious existence seems to him.

A high degree of intellect tends to make a man unsocial.

Clio, the muse of history, is as thoroughly infected with lies as a street whore with syphilis.

Life is a constant process of dying.

A sense of humour is the only divine quality of man.

Life is short and truth works far and lives long: let us speak the truth.

Buying books would be a good thing if we also could buy the time to read them.

Mostly it is loss which teaches us about the worth of things.

Reading is thinking with some one else’s head instead of one’s own.

The truth can wait, for she lives a long life.

There is no doubt that life is given us, not to be enjoyed, but to be overcome.

Will minus intellect constitutes vulgarity.

For everyday life, genius is as useful as a giant telescope in the theater.

For our improvement we need a mirror.

Intellect is invisible to the man who has none.

No rose without a thorn but many a thorn without a rose.

People of Wealth and the so called upper class suffer the most from boredom.

The safest way of not being very miserable is not to expect to be very happy.

The shortness of life, so often lamented, may be the best thing about it.

Treat a work of art like a prince: let it speak to you first.

Compassion is the basis of morality.

Hope is the confusion of the desire for a thing with its probability.

If God made this world, then i would not want to be the God. It is full of misery and distress that it breaks my heart.

In our monogamous part of the world, to marry means to halve one’s rights and double one’s duties.

It is with trifles and when he is off guard that a man best reveals his character.

Men need some kind of external activity, because they are inactive within.

The doctor sees all the weakness of mankind; the lawyer all the wickedness, the theologian all the stupidity.

The two foes of human happiness are pain and boredom.

The wise have always said the same things, and fools, who are the majority have always done just the opposite.

Wealth is like sea-water; the more we drink, the thirstier we become.

Because people have no thoughts to deal in, they deal cards, and try and win one another’s money. Idiots!

Every nation criticizes every other one — and they are all correct.

Every parting gives a foretaste of death, every reunion a hint of the resurrection.

Great men are like eagles, and build their nest on some lofty solitude.

Politeness is to human nature what warmth is to wax

A man can be himself only so long as he is alone; and if he does not love solitude, he will not love freedom; for it is only when he is alone that he is really free.

If there is anything in the world that can really be called a man’s property, it is surely that which is the result of his mental activity.

If we were not all so interested in ourselves, life would be so uninteresting that none of us would be able to endure it.

It is difficult to find happiness within oneself, but it is impossible to find it anywhere else.

Marrying means, to grasp blindfolded into a sack hoping to find out an eel out of an assembly of snakes.

Men are the devils of the earth, and the animals are its tormented souls.

Ordinary people merely think how they shall “spend” their time; a man of talent tries to “use” it.

Rascals are always sociable — more’s the pity! and the chief sign that a man has any nobility in his character is the little pleasure he takes in others’ company.

There are 80,000 prostitutes in London alone and what are they, if not bloody sacrifices on the altar of monogamy?

Each day is a little life: every waking and rising a little birth, every fresh morning a little youth, every going to rest and sleep a little death.

For where did Dante get the material for his Hell, if not from this actual world of ours?

I believe that when death closes our eyes we shall awaken to a light, of which our sunlight is but the shadow.

I have described religion as the metaphysics of the people.

Life is a business that does not cover the costs.

Memory works like the collection glass in the Camera obscura: it gathers everything together and therewith produces a far more beautiful picture than was present originally.

Music is the occult metaphysical exercise of a soul not knowing that it philosophizes.

Obstinacy is the result of the will forcing itself into the place of the intellect.

Only a male intellect clouded by the sexual drive could call the stunted, narrow-shouldered, broad-hipped and short-legged sex the fair sex.

Philosophy of religion really amounts to philosophizing on certain favorite assumptions that are not confirmed at all.

Philosophy is a science, and as such has no articles of faith; accordingly, in it nothing can be assumed as existing except what is either positively given empirically, or demonstrated through indubitable conclusions.

Religion is the masterpiece of the art of animal training, for it trains people as to how they shall think.

The alchemists in their search for gold discovered many other things of greater value.

The animal lacks both anxiety and hope because its consciousness is restricted to what is clearly evident and thus to the present moment: the animal is the present incarnate.

The bad thing about all religions is that, instead of being able to confess their allegorical nature, they have to conceal it.

The brain may be regarded as a kind of parasite of the organism, a pensioner, as it were, who dwells with the body.

The business of the novelist is not to relate great events, but to make small ones interesting.

The world is my idea.

Arthur Schopenhauer died in 1860 at the age of 72. His work would go on to influence some of the greatest minds of the 19th and 20th centuries, including Friedrich Nietzsche, Ludwig Wittgenstein, and Albert Einstein.

Did you enjoy these Arthur Schopenhauer aphorisms? Here’s a few more maxims, quotes, and thought collections from some of the world’s finest thinkers:

Most Quoted is the home of sayings, words of wisdom and quotes from the most quoted philosophers, writers, artists and thinkers. In addition to this collection of the most quoted Arthur Schopenhauer quotes and thoughts, you will find hundreds of others from thought-leaders on this site.