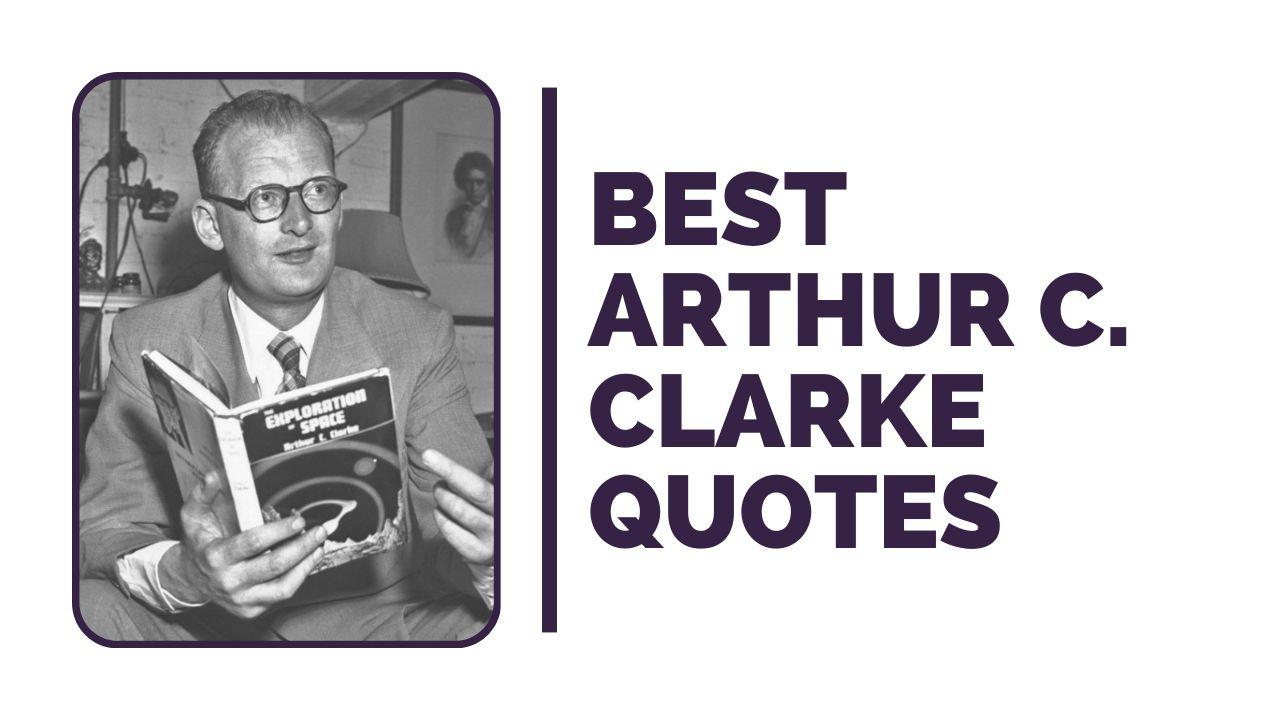 Arthur C. Clarke was one of the most famous science fiction writers of all time. He is best known for his novel 2001: A Space Odyssey, which was made into a movie by Stanley Kubrick.

Clarke was also a science writer and futurist, and he wrote many non-fiction books about space travel, communication satellites, and the possibilities of extraterrestrial life. He won many awards for his work during his lifetime, including the Hugo Award and three Nebula Awards.

Clarke went on to write more than 100 books during his lifetime, covering topics such as space exploration, artificial intelligence, and the future of humanity. He also remained an active voice in the scientific community, serving as chairman of the British Interplanetary Society and president of the Royal Astronomical Society. He was knighted by Queen Elizabeth II in 2000 for his contributions to literature and science.

The greatest tragedy in mankind’s entire history may be the hijacking of morality by religion.

Behind every man now alive stand thirty ghosts, for that is the ratio by which the dead outnumber the living.

Two possibilities exist: Either we are alone in the universe or we are not. Both are equally terrifying.

Never attribute to malevolence what is merely due to incompetence.

Magic’s just science that we don’t understand yet.

Religion is a byproduct of fear.

Astronomy, as nothing else can do, teaches men humility.

There is hopeful symbolism in the fact that flags do not wave in a vacuum. 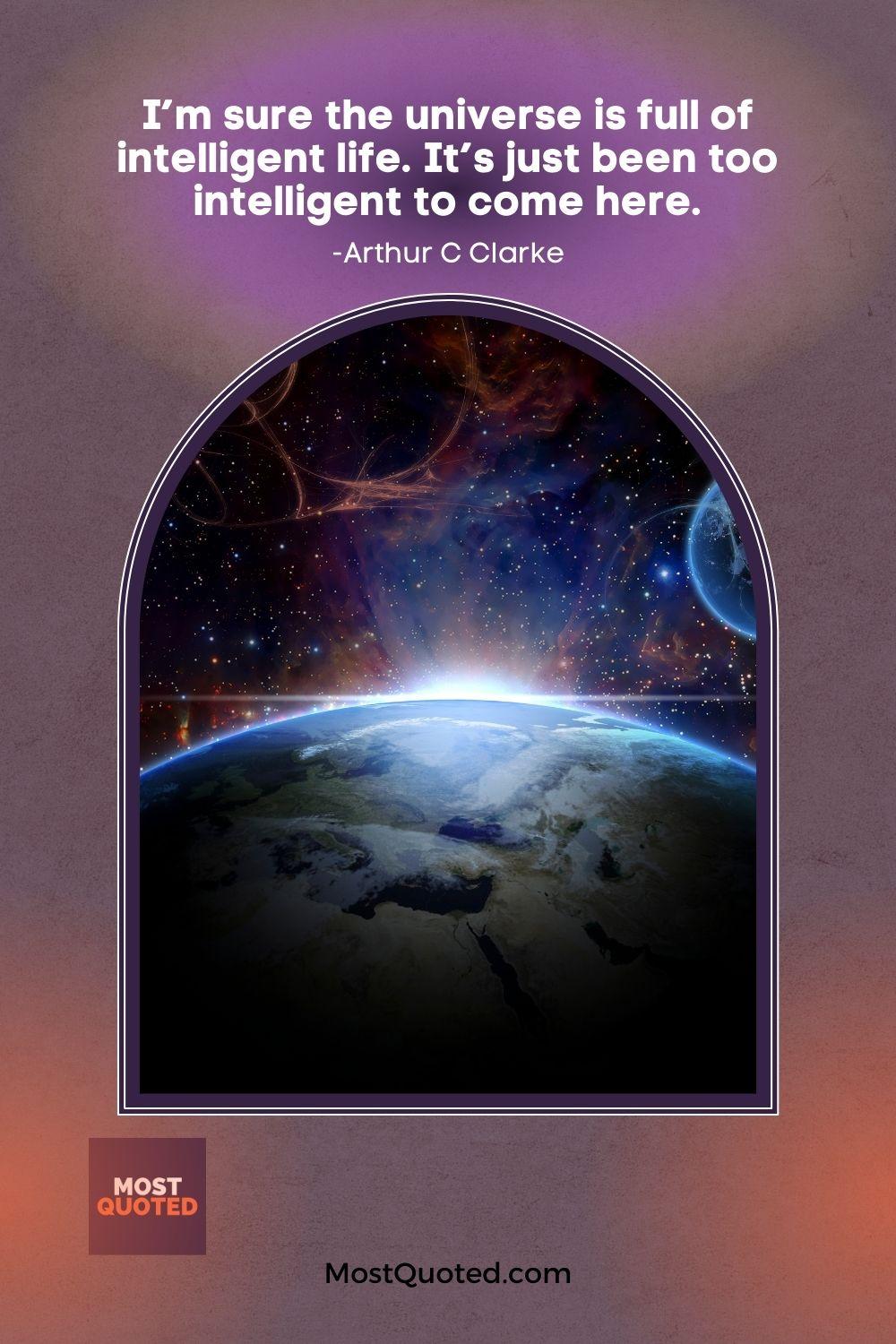 I’m sure the universe is full of intelligent life. It’s just been too intelligent to come here.

Perhaps our role on this planet is not to worship God — but to create Him.

Science can destroy religion by ignoring it as well as by disproving its tenets. No one ever demonstrated, so far as I am aware, the non-existence of Zeus or Thor — but they have few followers now.

My favorite definition of an intellectual: ‘Someone who has been educated beyond his/her intelligence’.

A well-stocked mind is safe from boredom.

“Any sufficiently advanced technology is indistinguishable from magic.”

Few artists thrive in solitude and nothing is more stimulating than the conflict of minds with similar interests.

The only real problem in life is what to do next.

Getting information from the Internet is like getting a glass of water from the Niagara Falls.

Religion is the most malevolent of all mind viruses.

I have encountered a few “creationists” and because they were usually nice, intelligent people, I have been unable to decide whether they were really mad or only pretending to be mad. If I was a religious person, I would consider creationism nothing less than blasphemy. Do its adherents imagine that God is a cosmic hoaxer who has created the whole vast fossil record for the sole purpose of misleading humankind?

It is not easy to see how the more extreme forms of nationalism can long survive when men have seen the Earth in its true perspective as a single small globe against the stars.

How inappropriate to call this planet Earth when it is quite clearly Ocean.

Because politics is the science of the possible, it only appeals to second-rate minds. The first raters only interested in the impossible.

If he was indeed mad, his delusions were beautifully organized

A 100 years ago, the electric telegraph made possible-indeed, inevitable-the United States of America. The communications satellite will make equally inevitable a United Nations of Earth; let us hope that the transition period will not be equally bloody.

No one of intelligence resents the inevitable.

Utopia was here at last; its novelty had not yet been assailed by the supreme enemy of all Utopias: boredom.

Since women are better at producing babies, presumably Nature has given men some talent to compensate. But for the moment I can’t think of it.

Before you become too entranced with gorgeous gadgets and mesmerizing video displays, let me remind you that information is not knowledge, knowledge is not wisdom, and wisdom is not foresight. Each grows out of the other, and we need them all.

Civilization will reach maturity only when it learns to value diversity of character and of ideas.

Until we get rid of religion, we won’t be able to conduct the search for God.

I would defend the liberty of consenting adult creationists to practice whatever intellectual perversions they like in the privacy of their own homes; but it is also necessary to protect the young and innocent.

In my life I have found two things of priceless worth: learning and loving. Nothing else – not fame, not power, not achievement for its own sake – can possible have the same lasting value.

I don’t believe in God but I’m very interested in her.

It has yet to be proven that intelligence has any survival value.

I’m a scientific expert; that means I know nothing about absolutely everything

If man can live in Manhattan, he can live anywhere.

Whether we are based on carbon or on silicon makes no fundamental difference; we should each be treated with appropriate respect.

Floyd could imagine a dozen things that could go wrong; it was little consolation that it was always the thirteenth that actually happened.

I sometimes think that the universe is a machine designed for the perpetual astonishment of astronomers.

Politicians should read science fiction, not westerns and detective stories.

The phenomenon of UFO doesn’t say anything about the presence of intelligence in space. It just shows how rare it is here on the earth.

It was the mark of a barbarian to destroy something one could not understand.

Only feeble minds are paralyzed by facts.

The moment when one first meets a great work of art has an impact that can never again be recaptured.

If there are any gods whose chief concern is man, they can’t be very important gods.

Only small minds are impressed by large numbers.

Sometimes a decision has to be made by a single individual, who has the authority to enforce it. That’s why you need a captain. You can’t run a ship by a committee-at least not all the time.

When one has to ask, “Am I really in love?” the answer is always “No”.

The universe must be full of voices, calling from star to star in a myriad tongues. One day we shall join that cosmic conversation.

The goal of the future is full unemployment, so we can play. That’s why we have to destroy the present politico-economic system.

The only way of discovering the limits of the possible is to venture a little way past them into the impossible.

I don’t pretend we have all the answers. But the questions are certainly worth thinking about.

The dinosaurs disappeared because they could not adapt to their changing environment. We shall disappear if we cannot adapt to an environment that now contains spaceships, computers — and thermonuclear weapons.

CNN is one of the participants in the war. I have a fantasy where Ted Turner is elected president but refuses because he doesn’t want to give up power.

Any teacher that can be replaced by a machine should be!

This is the first age that’s ever paid much attention to the future, which is a little ironic since we may not have one.

If we have learned one thing from the history of invention and discovery, it is that, in the long run — and often in the short one — the most daring prophecies seem laughably conservative.

If you want to read some more quotes from other famous authors and novelists, these quotes might interest you:

Most Quoted is the home of great quotes from authors, philosophers, artists and thinkers. In addition to this collection of Arthur C. Clarke quotes, you will find countless other quote lists and collections on this site.