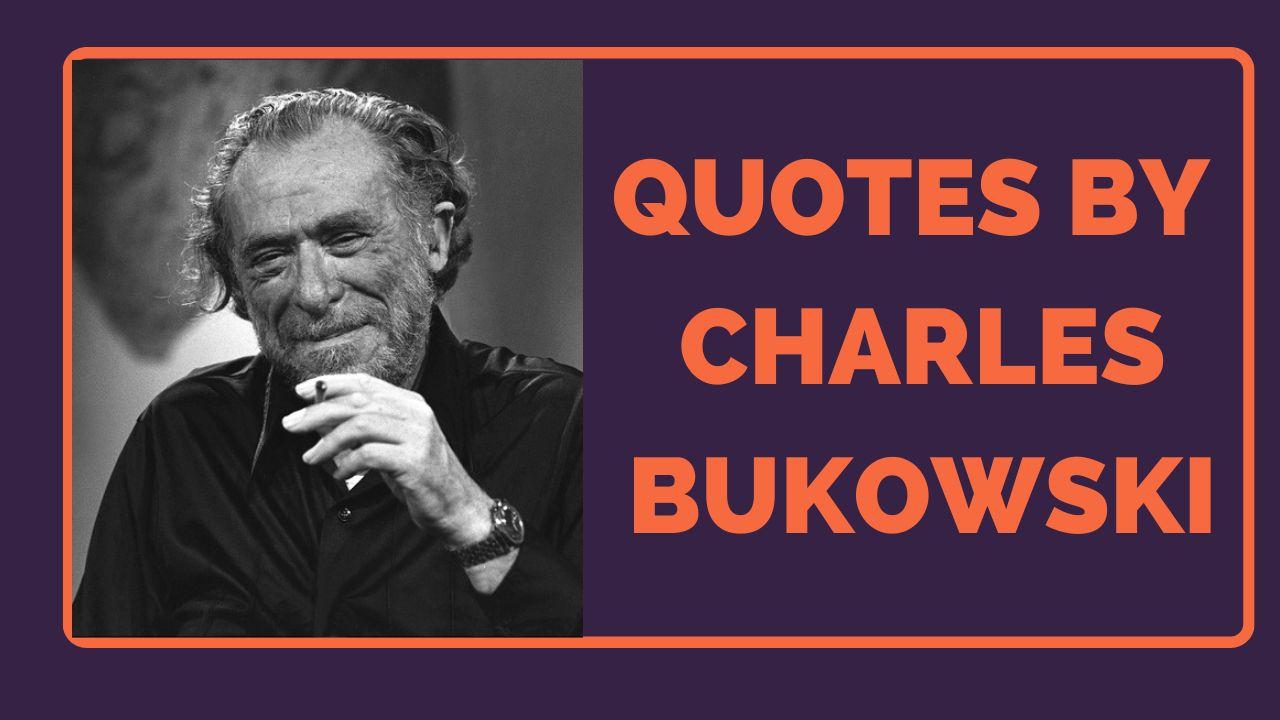 Charles Bukowski was an influential American poet, novelist and short story writer, best known for his honest portrayal of life’s struggles. Here’s some of his most quoted words.

Charles Bukowski was an American novelist, poet and short-story writer. He was born in Andernach, Germany in 1920 and raised in Los Angeles from the age of three. He is best known for his novel Post Office, which depicts a man struggling with poverty and addiction while working as a postal worker. Charles Bukowski also wrote hundreds of poems and short stories including numerous volumes of poetry such as Love Is a Dog from Hell, Burning in Water, Drowning in Flame and The Last Night of the Earth Poems.

Charles Bukowski died on March 9th 1994 at the age of 73. He left behind a legacy as one of the most influential writers in American literature, with his works being praised for their raw and honest portrayal of life’s struggles and joys. His writing style often contrasted dark humor with realism and has been compared to that of Hunter S. Thompson and Jack Kerouac. His works have been translated into more than a dozen languages, inspiring generations of readers around the world.

the free soul is rare, but you know it when you see it – basically because you feel good, very good, when you are near or with them.

You begin saving the world by saving one man at a time; all else is grandiose romanticism or politics.

I wanted the whole world or nothing.

A love like that was a serious illness, an illness from which you never entirely recover.

For those who believe in God, most of the big questions are answered. But for those of us who can’t readily accept the God formula, the big answers don’t remain stone-written. We adjust to new conditions and discoveries. We are pliable. Love need not be a command nor faith a dictum. I am my own god. We are here to unlearn the teachings of the church, state, and our educational system. We are here to drink beer. We are here to kill war. We are here to laugh at the odds and live our lives so well that Death will tremble to take us.

People are strange: They are constantly angered by trivial things, but on a major matter like totally wasting their lives, they hardly seem to notice. 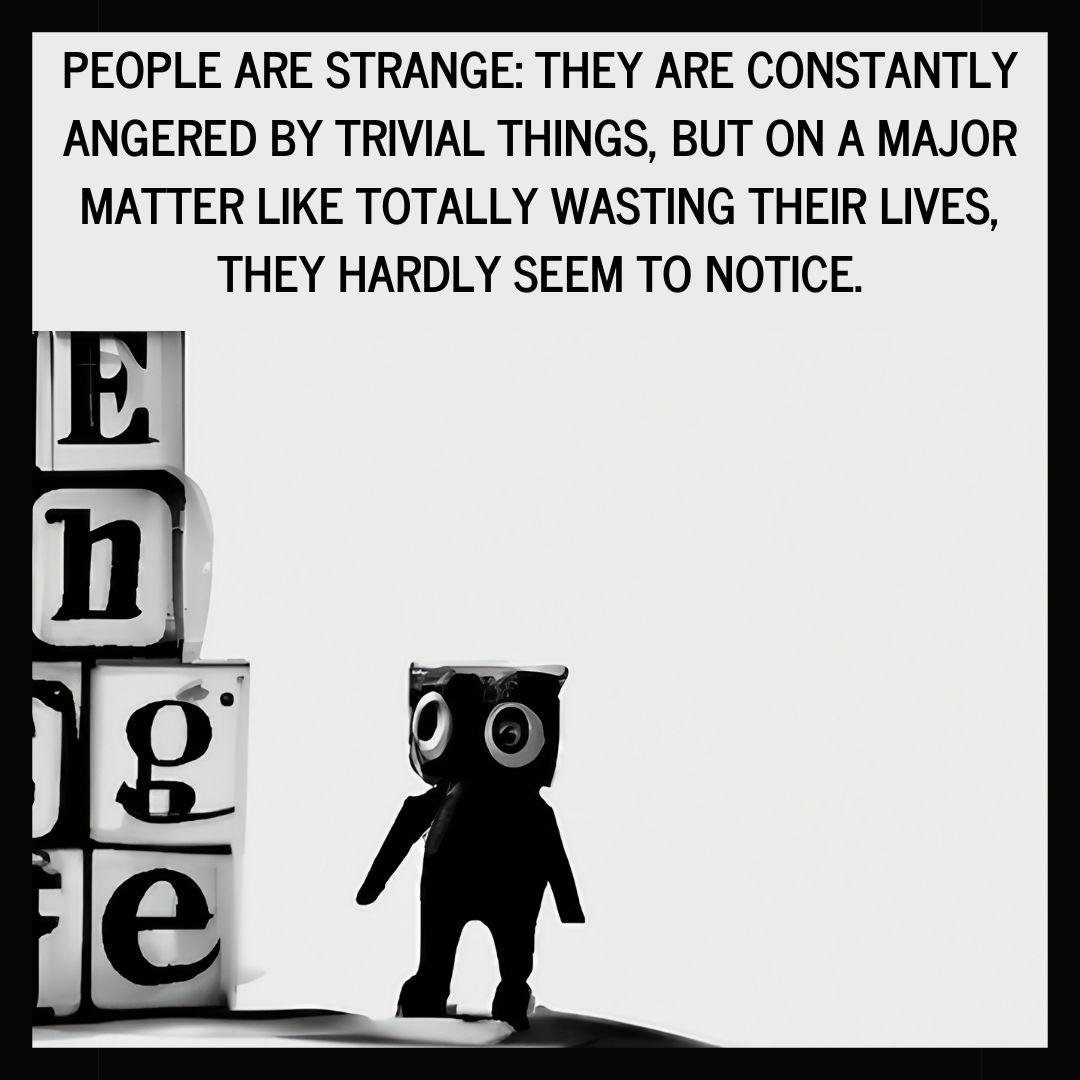 Sometimes you climb out of bed in the morning and you think, I’m not going to make it, but you laugh inside — remembering all the times you’ve felt that way.

We’re all going to die, all of us, what a circus! That alone should make us love each other but it doesn’t. We are terrorized and flattened by trivialities, we are eaten up by nothing.

Almost all poetry is a failure, because it sounds like somebody saying, Look, I have written a poem!

Some people never go crazy. What truly horrible lives they must live.

What matters most is how well you walk through the fire.

My ambition is handicapped by laziness.

You have to die a few times before you can really live.

Find what you love and let it kill you.

If you’re losing your soul and you know it, then you’ve still got a soul left to lose.

Real loneliness is not necessarily limited to when you are alone.

Poetry is what happens when nothing else can.

Of course it’s possible to love a human being if you don’t know them too well.

People with no morals often considered themselves more free, but mostly they lacked the ability to feel or love.

I stopped looking for a dream girl, I just wanted one that wasn’t a nightmare.

Without literature, life is hell.

And yet women –good women– frightened me because they eventually wanted your soul, and what was left of mine, I wanted to keep.

There are times when those eyes inside your brain stare back at you.

I never met another man I’d rather be. And even if that’s a delusion, it’s a lucky one.

Love is all right for those who can handle the psychic overload. It’s like trying to carry a full garbage can on your back over a rushing river of piss.

We are here to laugh at the odds and live our lives so well that Death will tremble to take us.

Beauty is nothing, beauty won’t stay. You don’t know how lucky you are to be ugly, because if people like you, you know it’s for something else.

The trouble with a mask is it never changes.

If you have the ability to love, love yourself first.

I guess the only time most people think about injustice is when it happens to them.

People empty me. I have to get away to refill.

The more crap you believe, the better off you are.

There are only two things wrong with money: too much or too little.

When a hot woman meets a hermit, one of them is going to change.

If you want to know who your friends are, get yourself a jail sentence.

Show me a man who lives alone and has a perpetually clean kitchen, and eight times out of nine I’ll show you a man with detestable spiritual qualities.

It began as a mistake.

Money is like sex. It seems much more important when you don’t have any.

An intellectual says a simple thing in a hard way. An artist says a hard thing in a simple way.

Some of the most commonly asked questions about the life and works of Charles Bukowski.

What is Charles Bukowski most famous poem?

Charles Bukowski’s most famous poem is likely ‘The Laughing Heart,’ which was first published in his collection Love is a Dog from Hell. The poem is about finding joy and purpose even in the midst of suffering and despair, and its opening lines – ‘Your life is your life/don’t let it be clubbed into dank submission’ – have become an iconic statement of resilience in the face of adversity.

What did Charles Bukowski say?

Charles Bukowski was known for his no-nonsense approach to life and often spoke with a wry wit. A good example of this is: ‘Writers are desperate people and when they stop being desperate they stop being writers.’

Why is Charles Bukowski famous?

Charles Bukowski is one of the most famous poets and authors of the 20th century. He gained notoriety with his brutally honest and often frank-speaking accounts of life, and his writings are characterized by unflinching observations about poverty, addiction, love and survival in a corrupt world.

What did Charles Bukowski say about sadness?

Charles Bukowski often spoke of sadness with a mix of resignation and humor. One famous quote of his is: ‘Sadness is caused by intelligence, the more you understand certain things, the more you wish you didn’t understand them.’