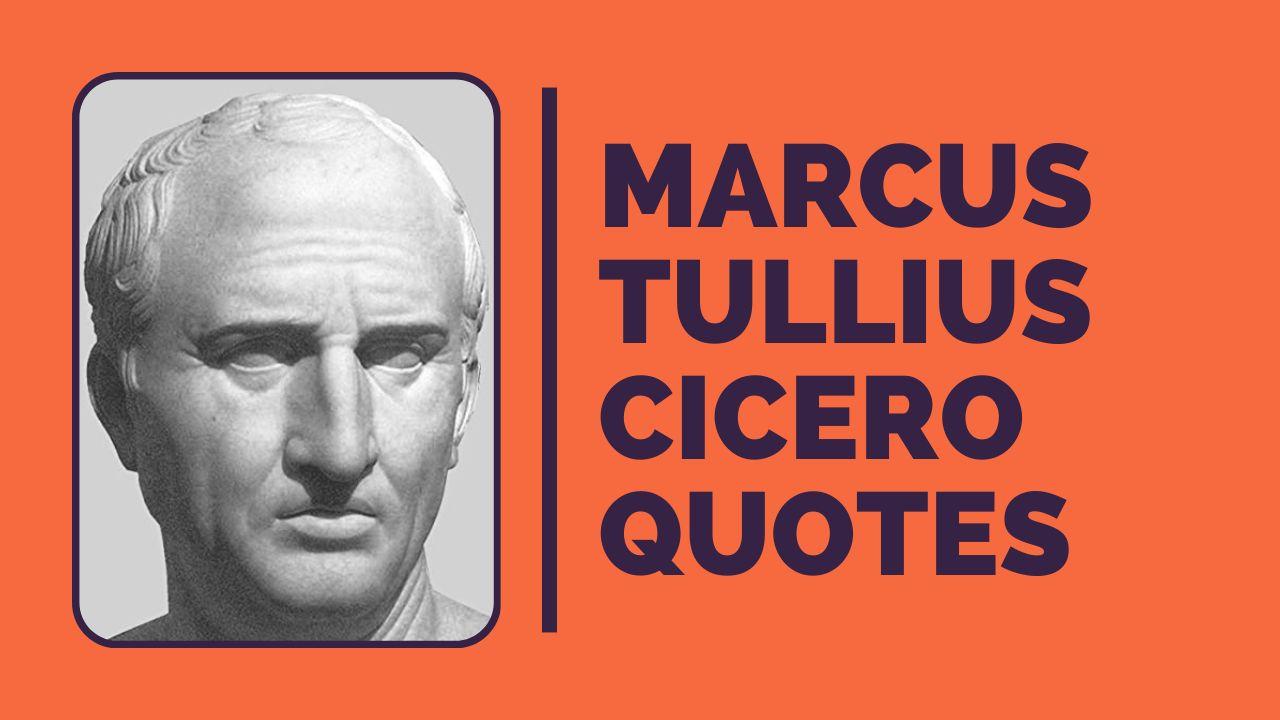 Marcus Tullius Cicero was a Roman philosopher, politician, lawyer, orator, and writer. He is considered one of Rome’s greatest orators and prose stylists.

Cicero thoughts and insights into life have been passed down through the ages and still resonate with people today. In particular, some of his observations about politics and human nature remind us that, although the times may change, people remain essentially the same.

Here are some of Cicero’s most memorable quotes:

A friend is, as it were a second self

The greatest pleasures are only narrowly separated from disgust

The good of the people is the greatest law

Live as brave men; and if fortune is adverse, front its blows with brave hearts

A room without books is like a body without a soul

Any man can make mistakes, but only an idiot persists in his error.

It is the character of a brave and resolute person not to be ruffled by adversity, and not to desert their post

What is morally wrong can never be advantageous, even when it enables you to make some gain that you believe to be to your advantage. The mere act of believing that some wrongful course of action constitutes an advantage is pernicious.

It is the peculiar quality of a fool to perceive the faults of others and to forget his own.

To be ignorant of what occurred before you were born is to remain always a child. For what is the worth of human life, unless it is woven into the life of our ancestors by the records of history?

The sweetest support is found in the most intimate friendship

When a government becomes powerful it is destructive, extravagant and violent; it is an usurer which takes bread from innocent mouths and deprives honorable men of their substance, for votes with which to perpetuate itself.

Faithfulness and truth are the most sacred excellence and endowments of the human mind.

Friendship improves happiness and abates misery, by the doubling of our joy and the dividing of our grief.

When time and need require, we should resist with all our might, and prefer death to slavery and disgrace.

The wise are instructed by reason, average minds by experience, the stupid by necessity and the brute by instinct

In times of war, the law falls silent

It is not by muscle, speed, or physical dexterity that great things are achieved, but by reflection, force of character, and judgment.

For books are more than books, they are the life, the very heart and core of ages past, the reason why men worked and died, the essence and quintessence of their lives.

The shifts of fortune test the reliability of friends

It is foolish to tear one’s hair in grief, as if grief could be lessened by baldness

A nation can survive its fools, and even the ambitious. But it cannot survive treason from within. An enemy at the gates is less formidable, for he is known and carries his banner openly. But the traitor moves amongst those within the gate freely, his sly whispers rustling through all the alleys, heard in the very halls of government itself

Do not blame Caesar, blame the people of Rome who have so enthusiastically acclaimed and adored him and rejoiced in their loss of freedom and danced in his path and gave him triumphal processions. Blame the people who hail him when he speaks in the Forum of the ‘new, wonderful good society’ which shall now be Rome

We are not born for ourselves alone.

Money is the soul of war.

Nobody dances sober, unless maybe he is insane.

The beginnings of all things are small.

We are slaves of the law in order to be free.

The welfare of the people is the ultimate law.

Law stands mute in the midst of arms.

To be rather than to seem.

To what length will you abuse our patience, Catiline?

What has been wrongly gained is wrongly lost.

Let arms yield to the toga.

Some of the most frequently asked questions about Marcus Tullius Cicero are answered below.

Cicero wrote many books, but only a few survive today. His most famous work is the Philippics, a series of 14 speeches he delivered in 44 BC denouncing Julius Caesar’s friend and ally Mark Antony.

What is Cicero’s most famous quote?

Cicero’s most famous quote is perhaps – A room without books is like a body without a soul.

What did Cicero say?

If you have a garden and a library, you have everything you need. Gratitude is not only the greatest of virtues, but the parent of all the others. Any man can make mistakes, but only an idiot persists in his error.

What is Cicero best known for?

Marcus Tullius Cicero was a Roman philosopher, orator, statesman, and lawyer who served as consul in the year 63 BC. He is considered one of the greatest orators of all time and one of the most important figures in the development of the Western political tradition.

What was Cicero’s philosophy?

Cicero’s philosophy was centered around the idea that one should live a good and virtuous life in order to be happy.