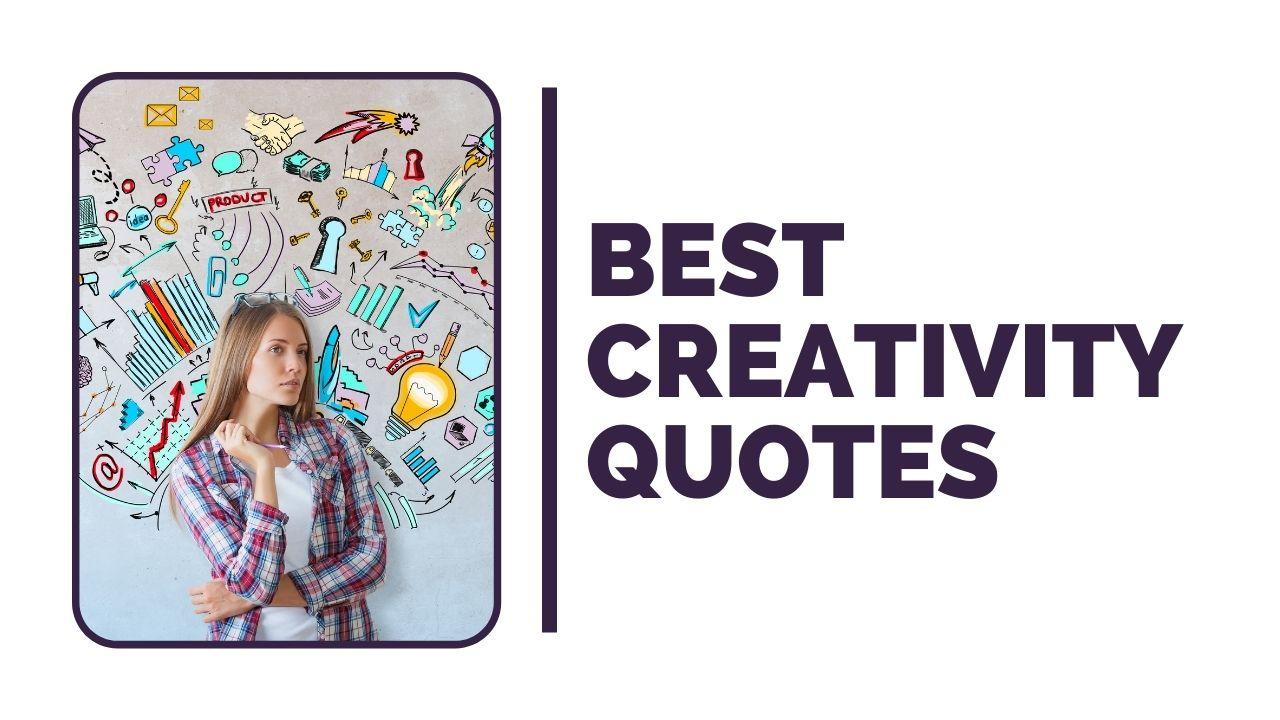 These creativity quotes can help you to stay motivated and inspired. Hopefully, they will encourage you to be creative in your own pursuits!

The creative process is often seen as mysterious, and people who are good at it are often thought to be possessed of some sort of magical talent. But the truth is that creativity is something that can be learned and improved with practice.

Of course, that’s great in theory. What do you do when you’re feeling stuck and need a little inspiration? That’s where these creativity quotes come in.

Gathered from some of the most creative minds in history, they’ll help jumpstart your own process and get those creative juices flowing again.

Let’s go invent tomorrow rather than worrying about what happened yesterday.

Don’t think. Thinking is the enemy of creativity. You can’t try to do things. You simply must do things.

Anxiety is part of creativity, the need to get something out.

Imagination is more important than knowledge. 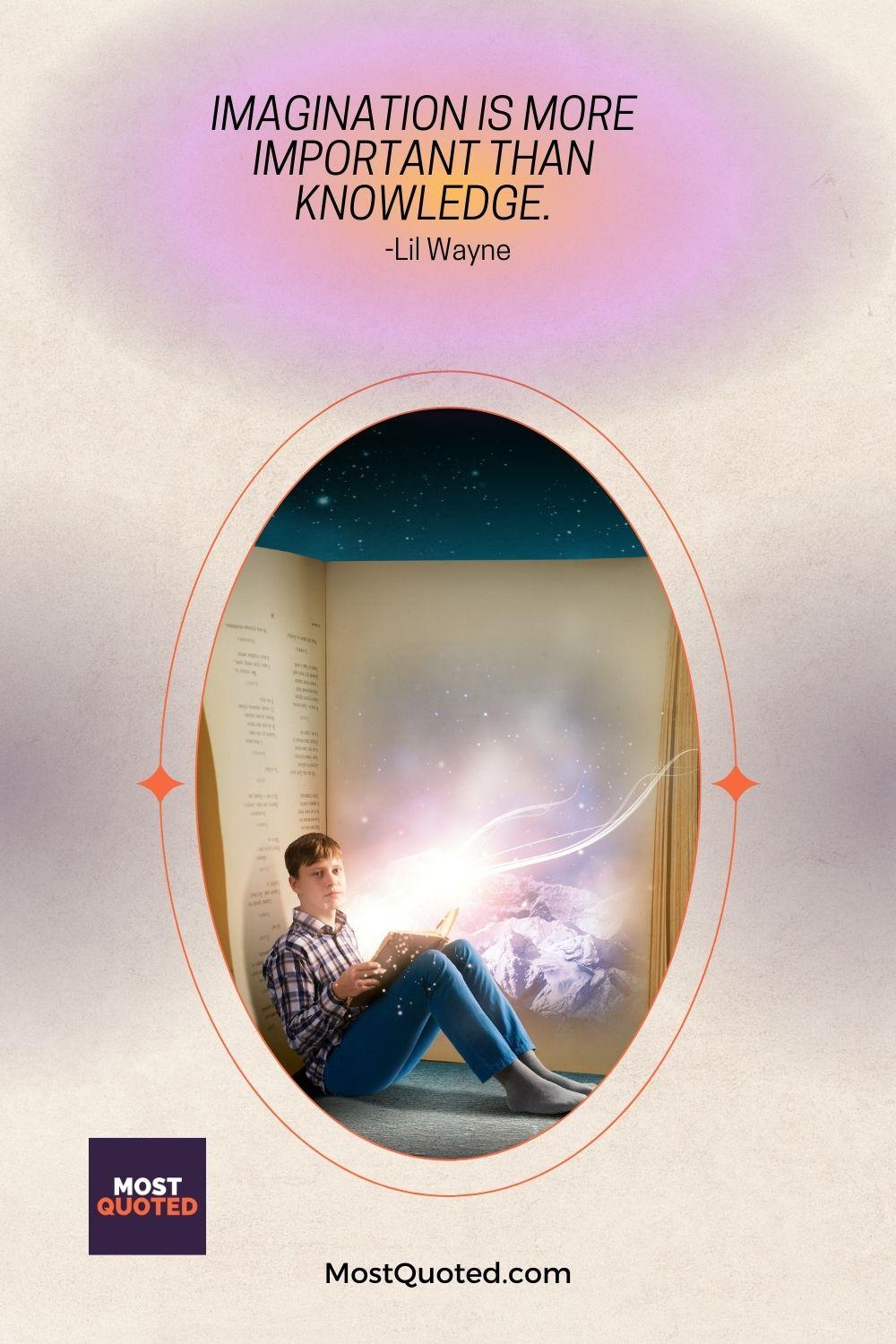 Enthusiasm is excitement with inspiration, motivation, and a pinch of creativity.

Innovation is saying no to a thousand things.

An essential aspect of creativity is not being afraid to fail. 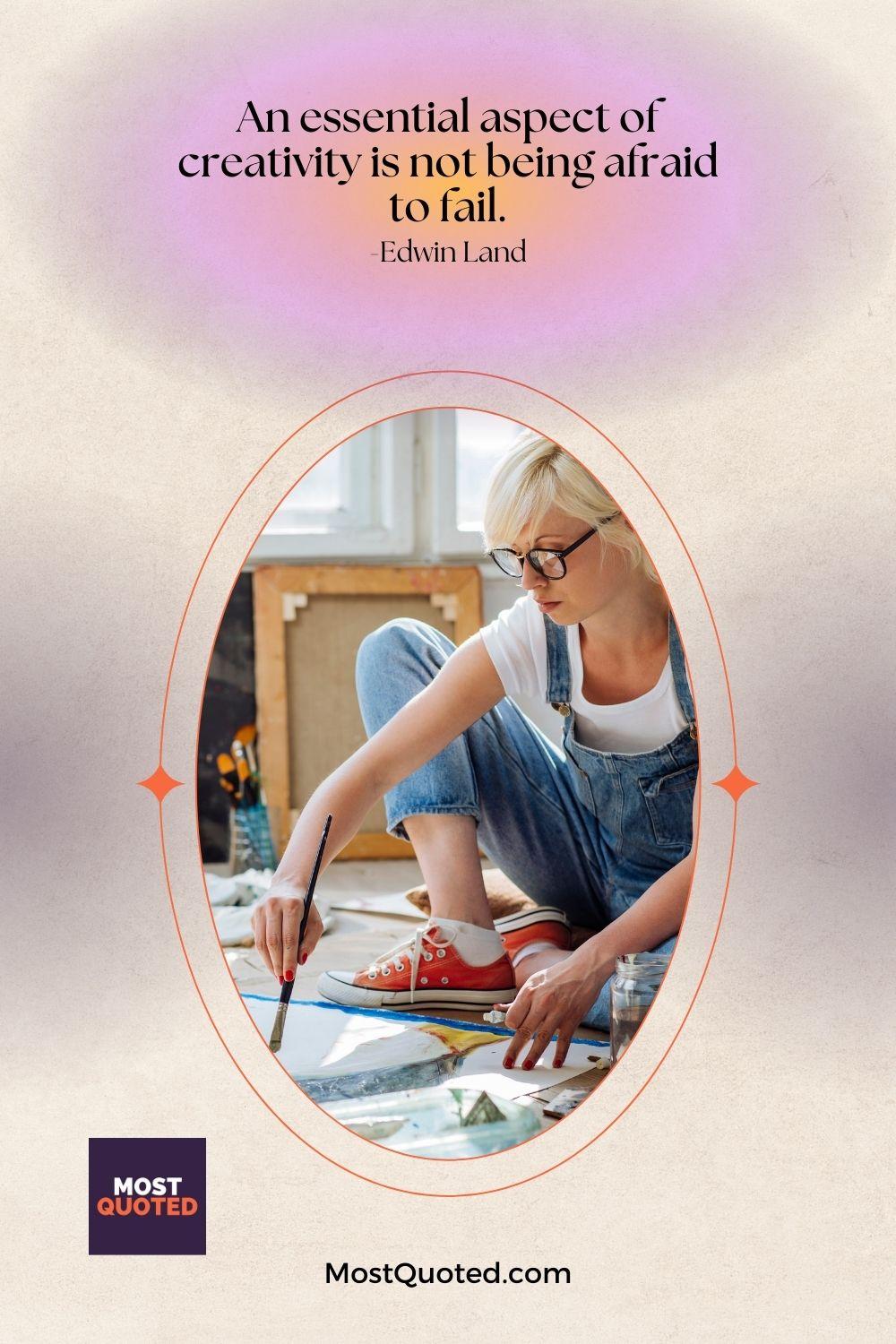 Creativity can be described as letting go of certainties. 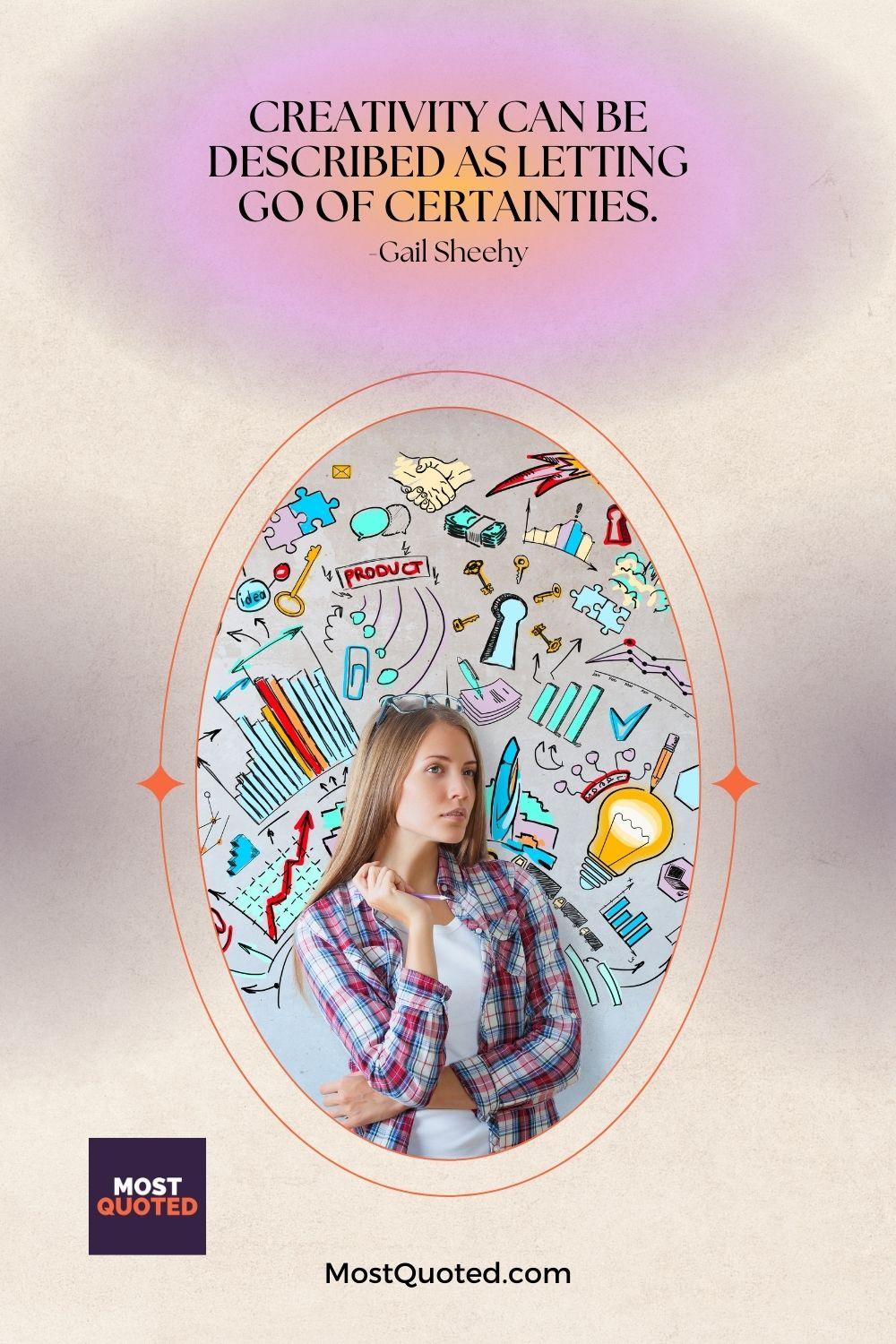 There is a fountain of youth: it is your mind, your talents, the creativity you bring to your life.

If you go with your instincts and keep your humor, creativity follows. With luck, success comes, too.

Creativity is a drug I cannot live without.

A person who never made a mistake never tried anything new.

You can never solve a problem on the level on which it was created.

Be a yardstick of quality. Some people aren’t used to an environment where excellence is expected.

If at first, the idea is not absurd, then there is no hope for it.

The artistry and the creativity in a story are better than any drugs.

The heart and soul of the company is creativity and innovation.

The secret to creativity is knowing how to hide your sources.

Creativity is the natural order of life.

If you want to live your life in a creative way, as an artist, you have to not look back too much.

Imagination is everything. It is the preview of life’s coming attractions. 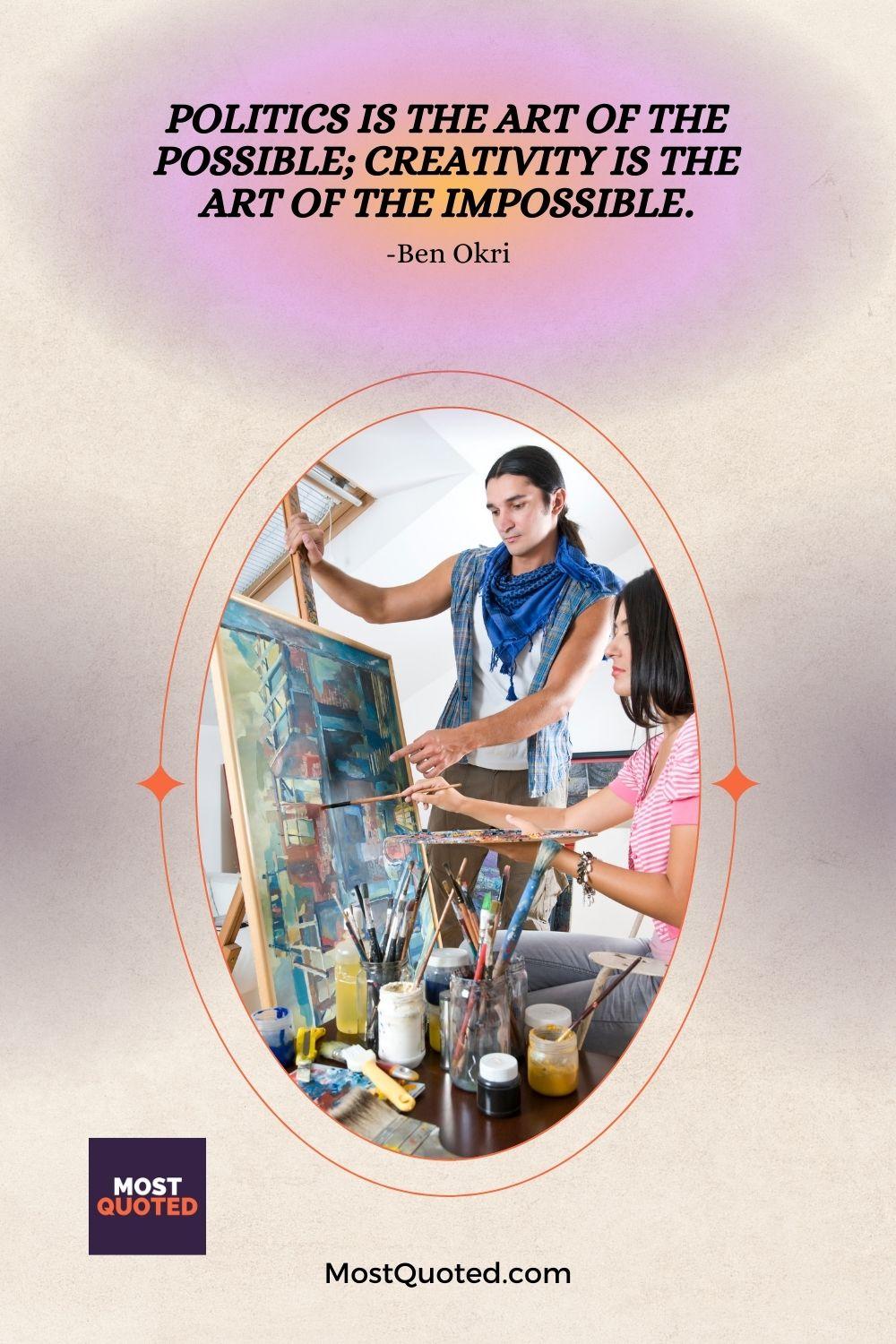 To be creative means to be in love with life. 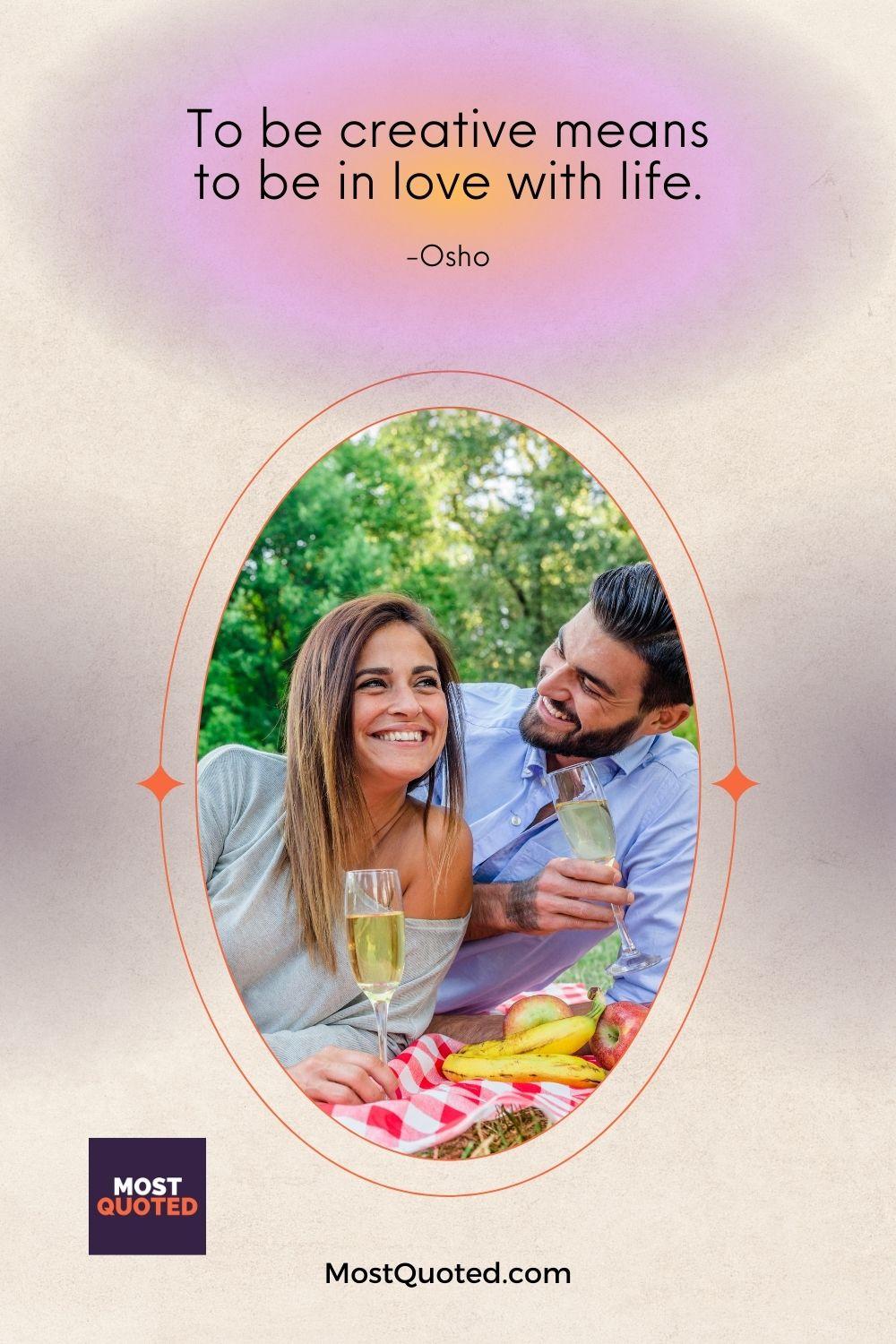 The most important thing is a person. A person who incites and feeds your curiosity; and machines cannot do that in the same way that people can.

Don’t let the noise of other’s opinions drown out your own inner voice.

When we are angry or depressed in our creativity, we have misplaced our power.

Creativity Quotes To Inspire You

Creativity is the greatest expression of liberty. 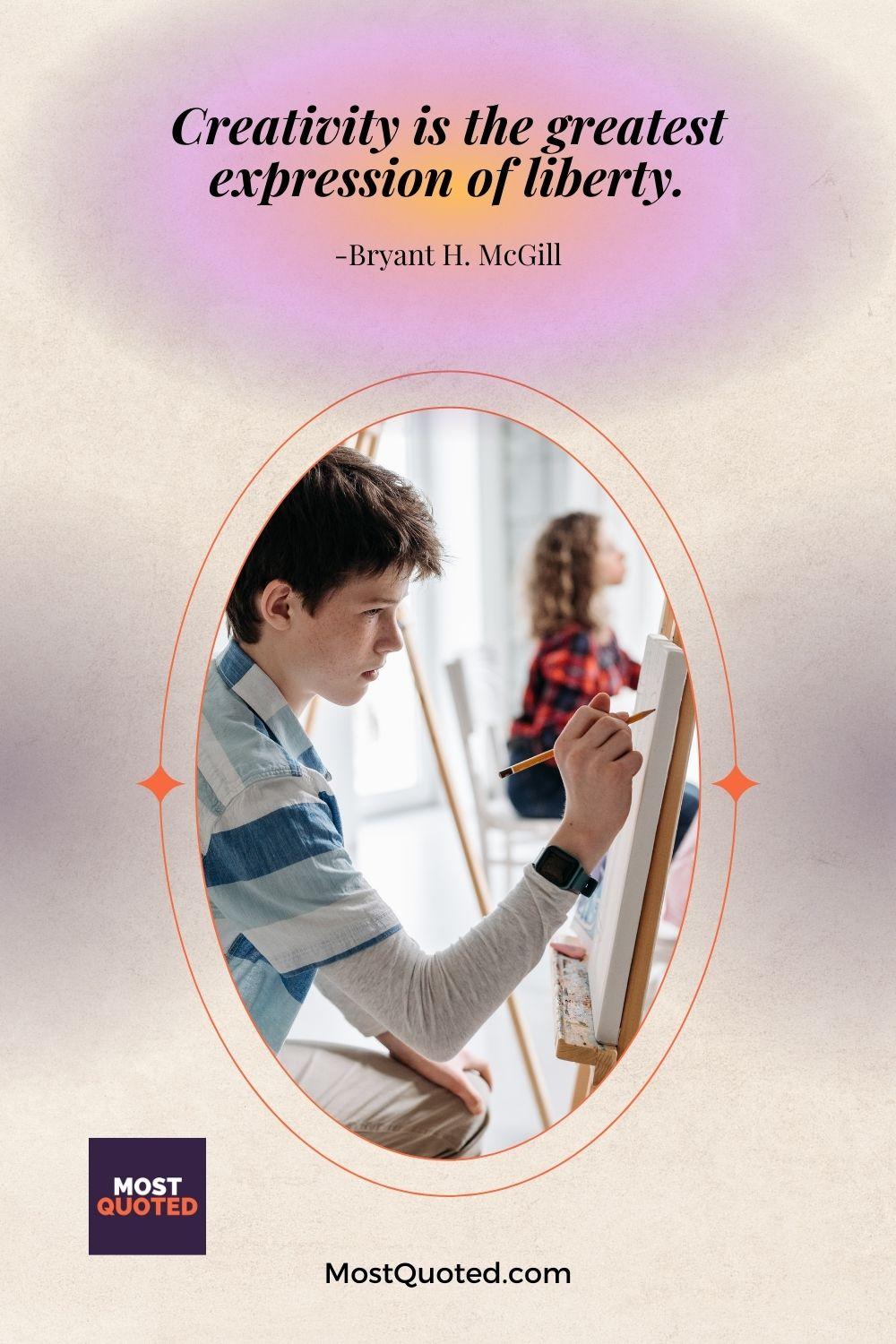 Creative living is where Big Magic will always abide.

I have no special talent. I am only passionately curious.

This simple process of focusing on things that are normally taken for granted is a powerful source of creativity.

Every day is an opportunity to be creative.

Creativity is the ability to introduce order into the randomness of nature.

Creativity requires the courage to let go of certainties.

Oh, the thinks you can think up if only you try.

Creativity is contagious, pass it on. 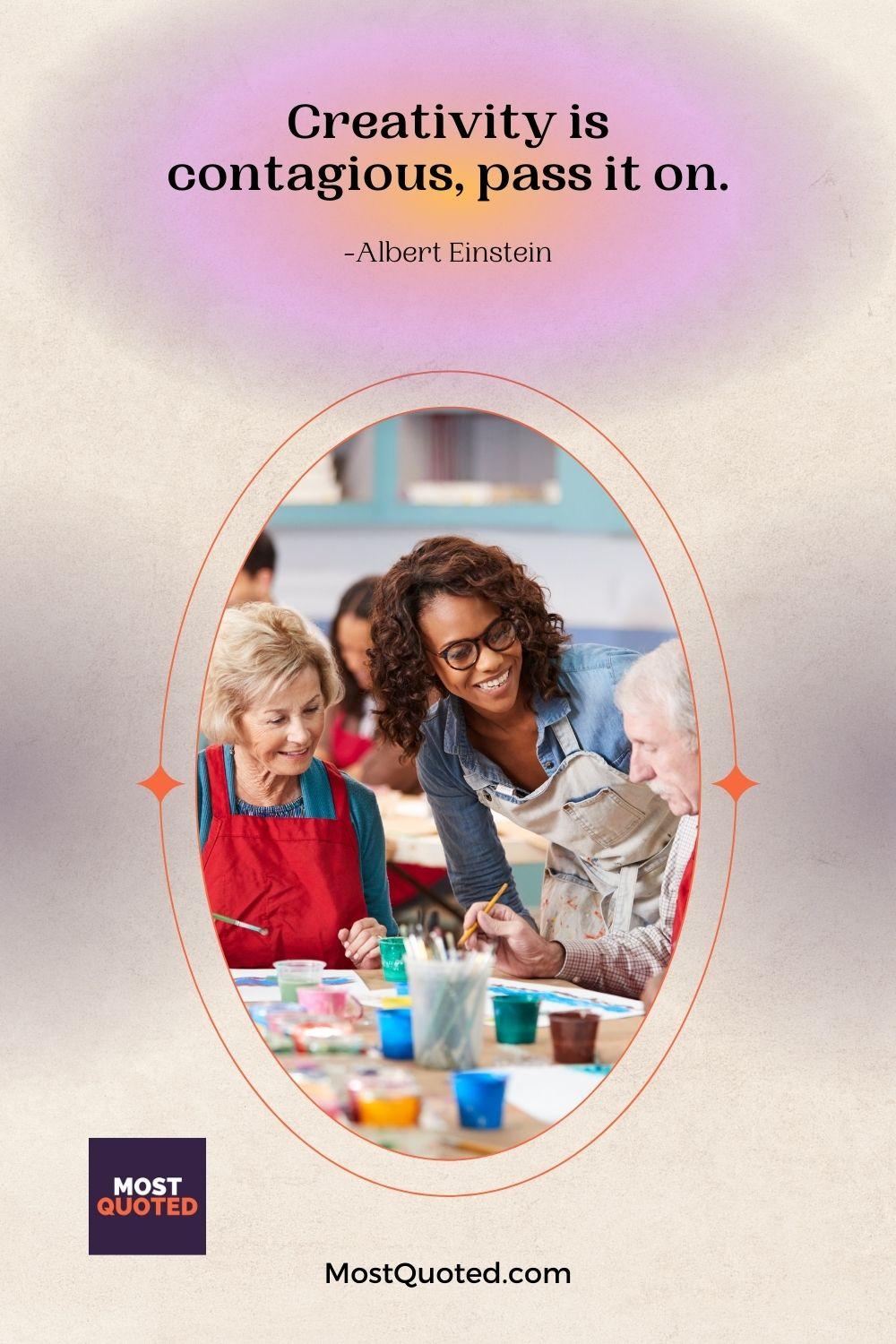 Creativity is what helps me escape a lot of my inner demons.

To design something really well, you have to get it. You have to really grok what it’s all about.

Creativity comes from a conflict of ideas.

You can’t connect the dots looking forward; you can only connect them looking backwards. 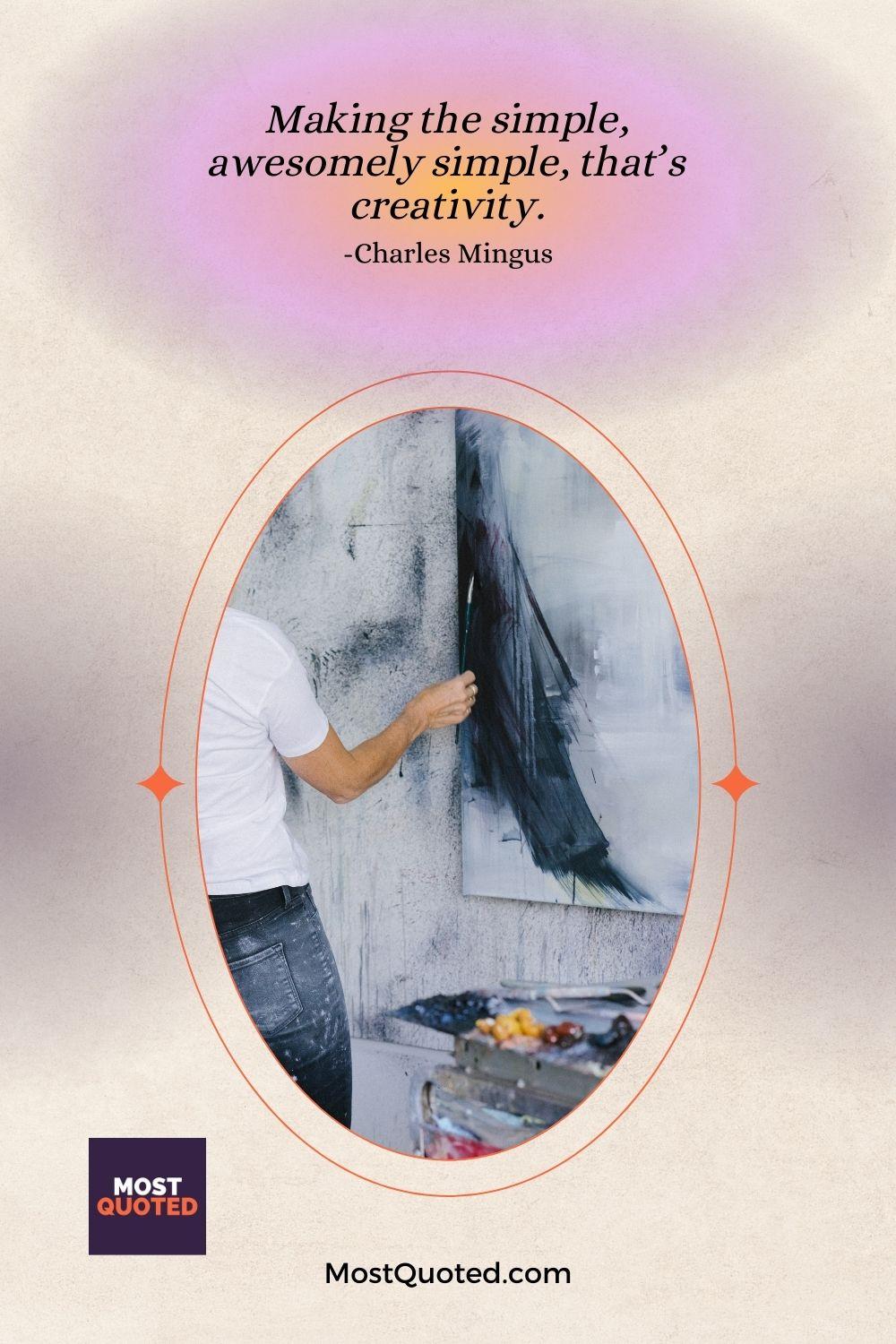 It’s really hard to design products by focus groups. A lot of times, people don’t know what they want until you show it to them.

Quotes About Being Creative

Quality is more important than quantity. One home run is much better than two doubles.

Invest time in yourself to have great experiences that are going to enrich you.

The way to ratchet up our species is to get better things to more people – products with spirit and creativity.

If today were the last of your life, would you do what you were going to do today?

There is no doubt that creativity is the most important human resource of all.

The refusal to be creative is self-will and is counter to our true nature.

Clean out a corner of your mind and creativity will instantly fill it.

Creativity is allowing yourself to make mistakes. Art is knowing which ones to keep.

I’ve found constancy and balance between creativity and normality.

An invasion of armies can be resisted, but not an idea whose time has come.

Controversy is part of the nature of art and creativity.

I try to manage my day by my circadian rhythms because the creativity is such an elusive thing.

Create whatever causes a revolution in your heart.

I’m convinced that about half of what separates successful entrepreneurs from the non-successful ones is pure perseverance.

We have the capacity for infinite creativity. 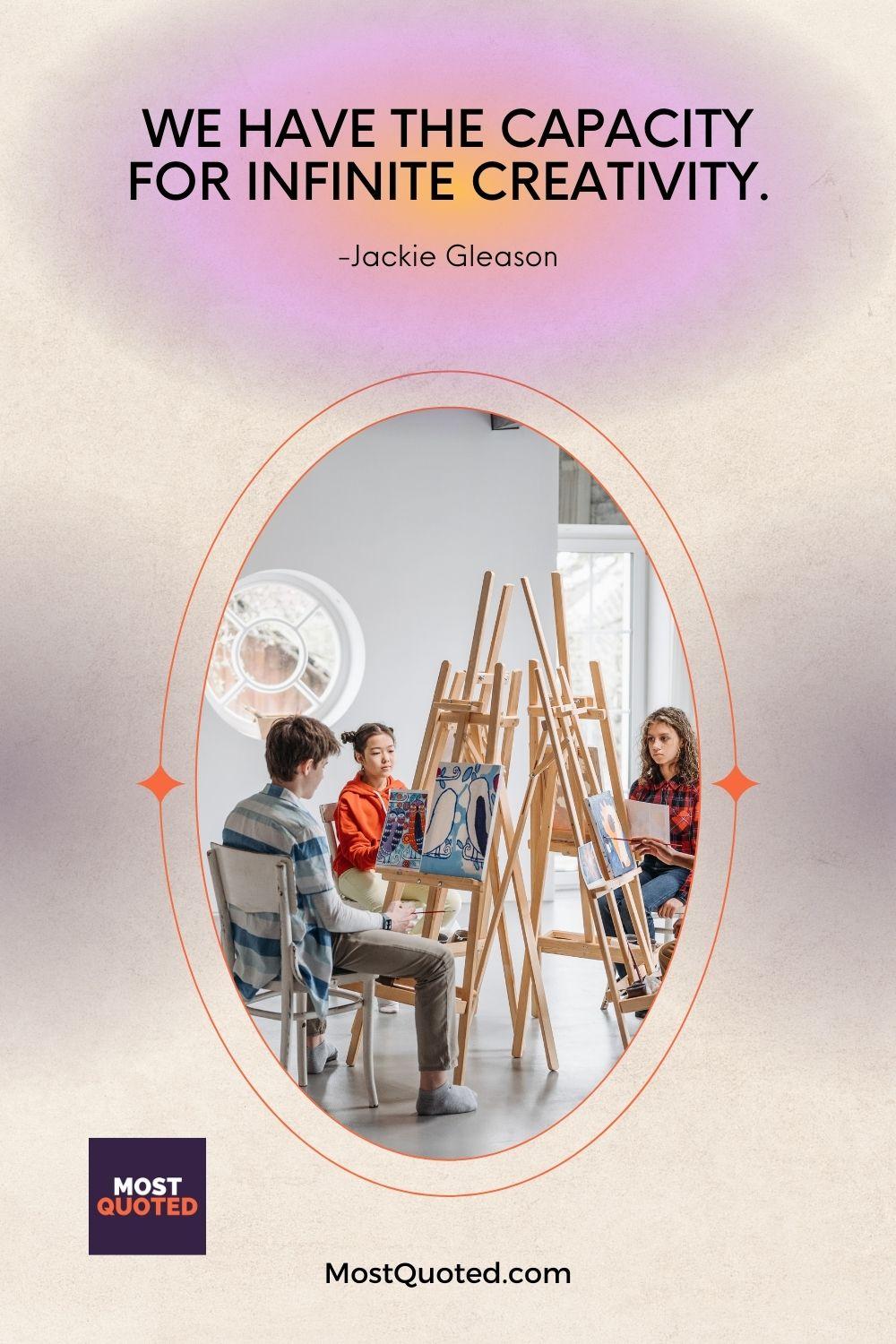 Creativity is piercing the mundane to find the marvelous.

Quotes and Thoughts on Creativity

A creative life is an amplified life.

Anxiety is the handmaiden of creativity.

I don’t know what I think until I write about it.

Have the courage to follow your heart and intuition.

Creativity itself doesn’t care at all about results – the only thing it craves is the process.

Creativity is a natural extension of our enthusiasm. 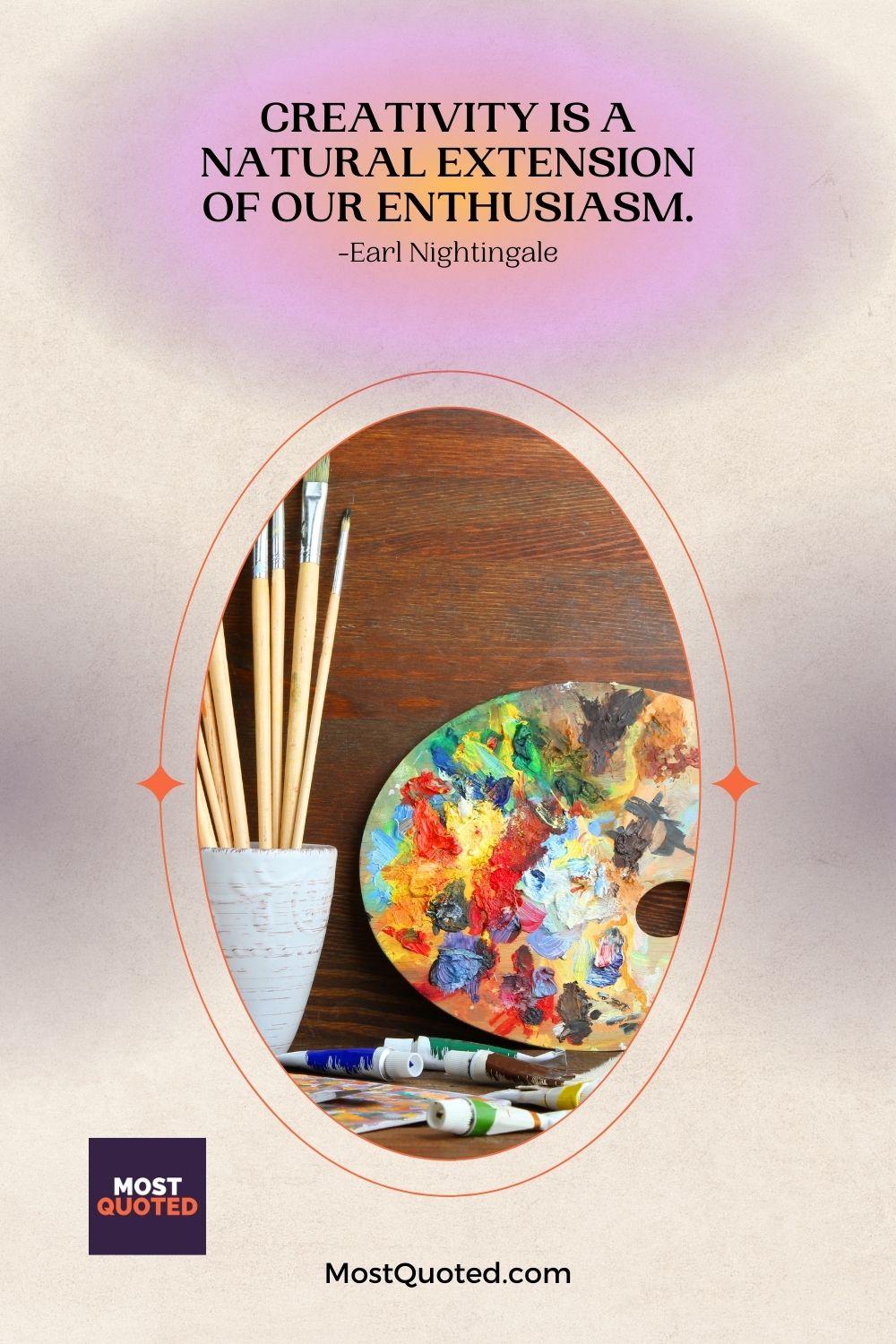 I never think of the future – it comes soon enough.

Any activity becomes creative when the doer cares about doing it right, or better.

Creativity is not the finding of a thing, but the making something out of it after it is found.

We cannot solve our problems with the same thinking we used when we created them.

Every child is an artist, the problem is staying an artist when you grow up.

It takes a lot of hard work to make something simple, to truly understand the underlying challenges and come up with elegant solutions.

Logic will get you from A to B. Imagination will take you everywhere.

The comfort zone is the great enemy to creativity.

The chief enemy of creativity is good sense.

Quotes on Being Creative

Creativity is a great motivator because it makes people interested in what they are doing.

It was anger more than anything else that had set me off, roused me into productivity and creativity.

It is better to fail in originality, than to succeed in imitation. 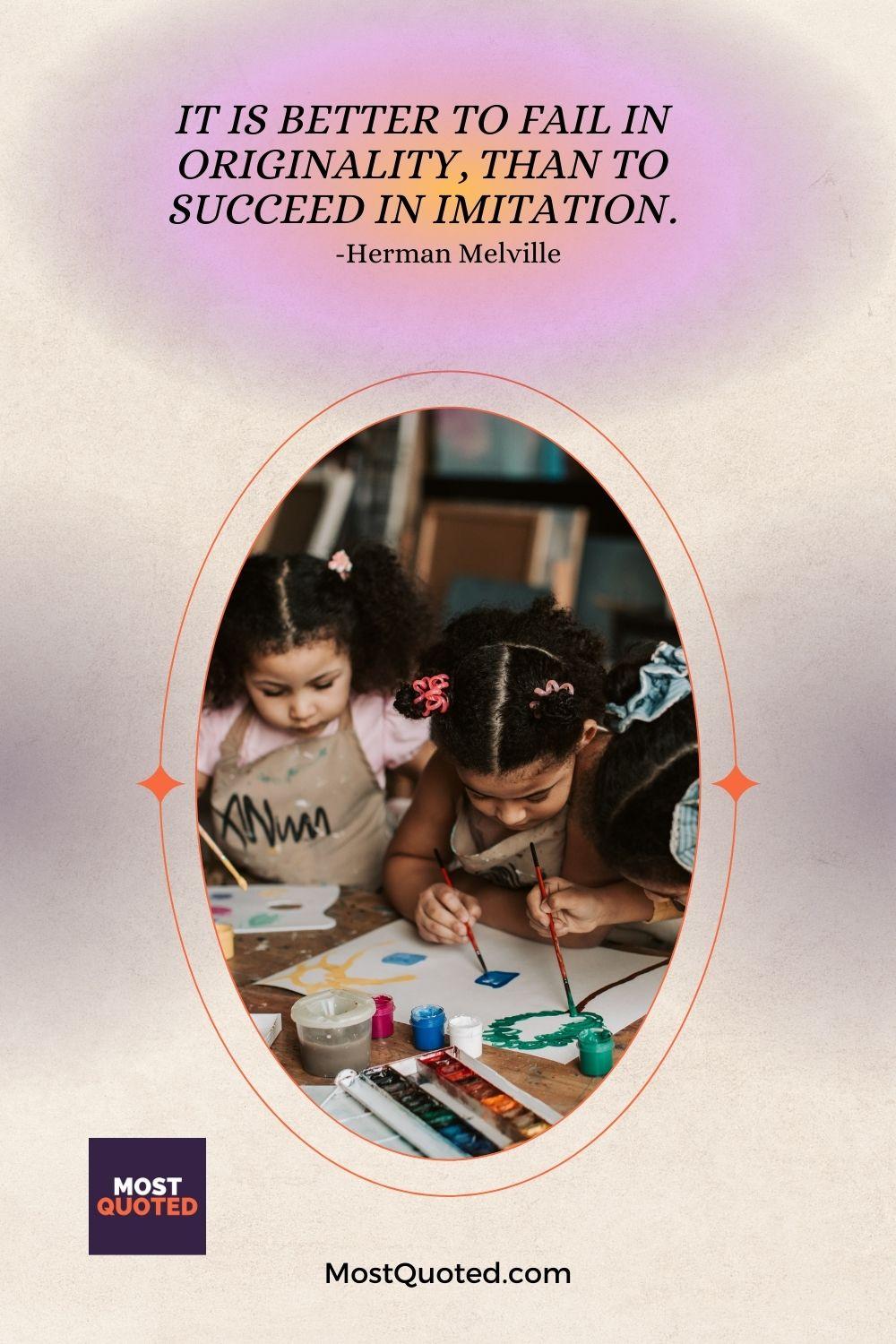 Creativity is breaking out of established patterns to look at things in a different way.

The worst enemy to creativity is self-doubt. 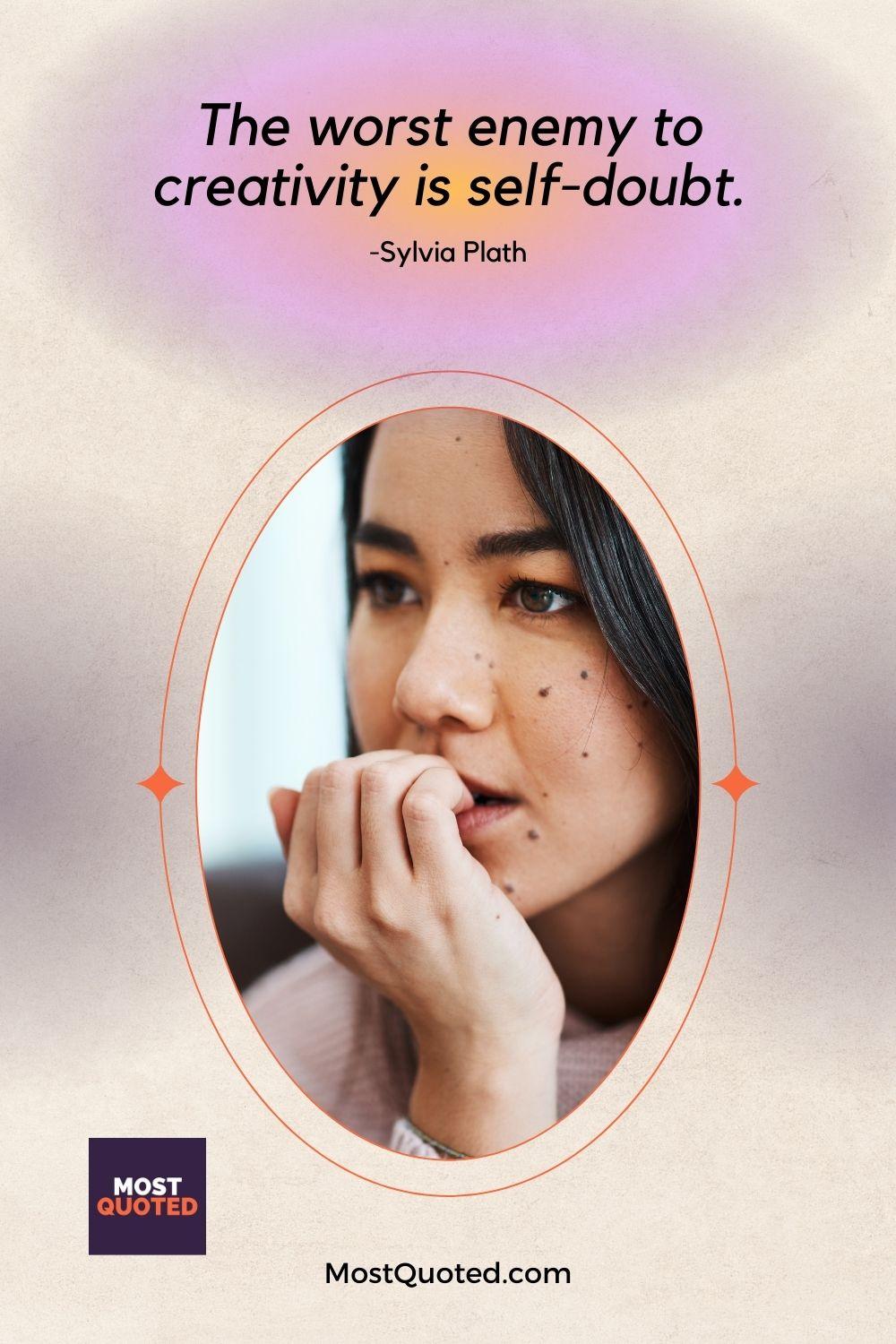 Your time is limited, so don’t waste it living someone else’s life. 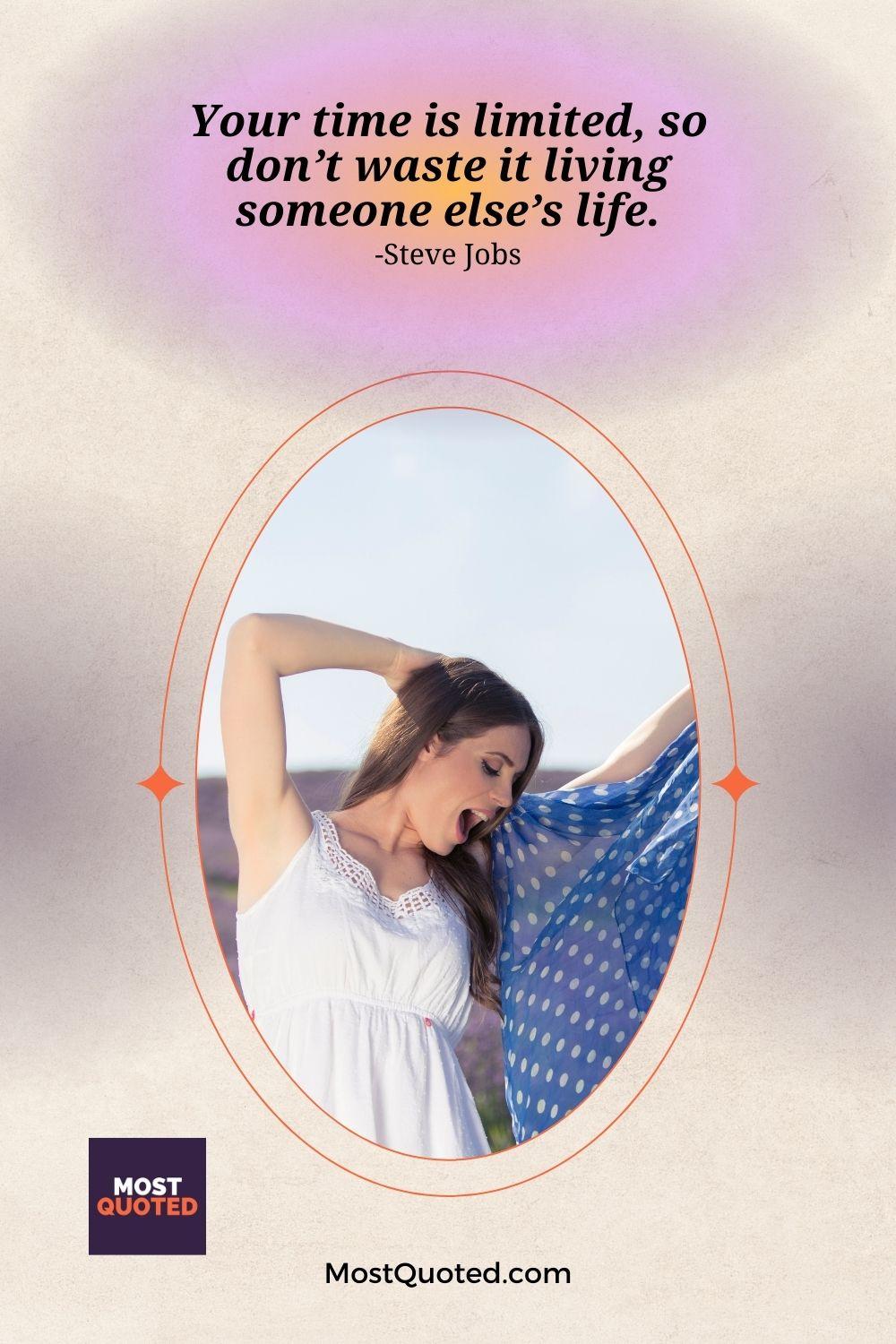 Look deep into nature, and then you will understand everything better. 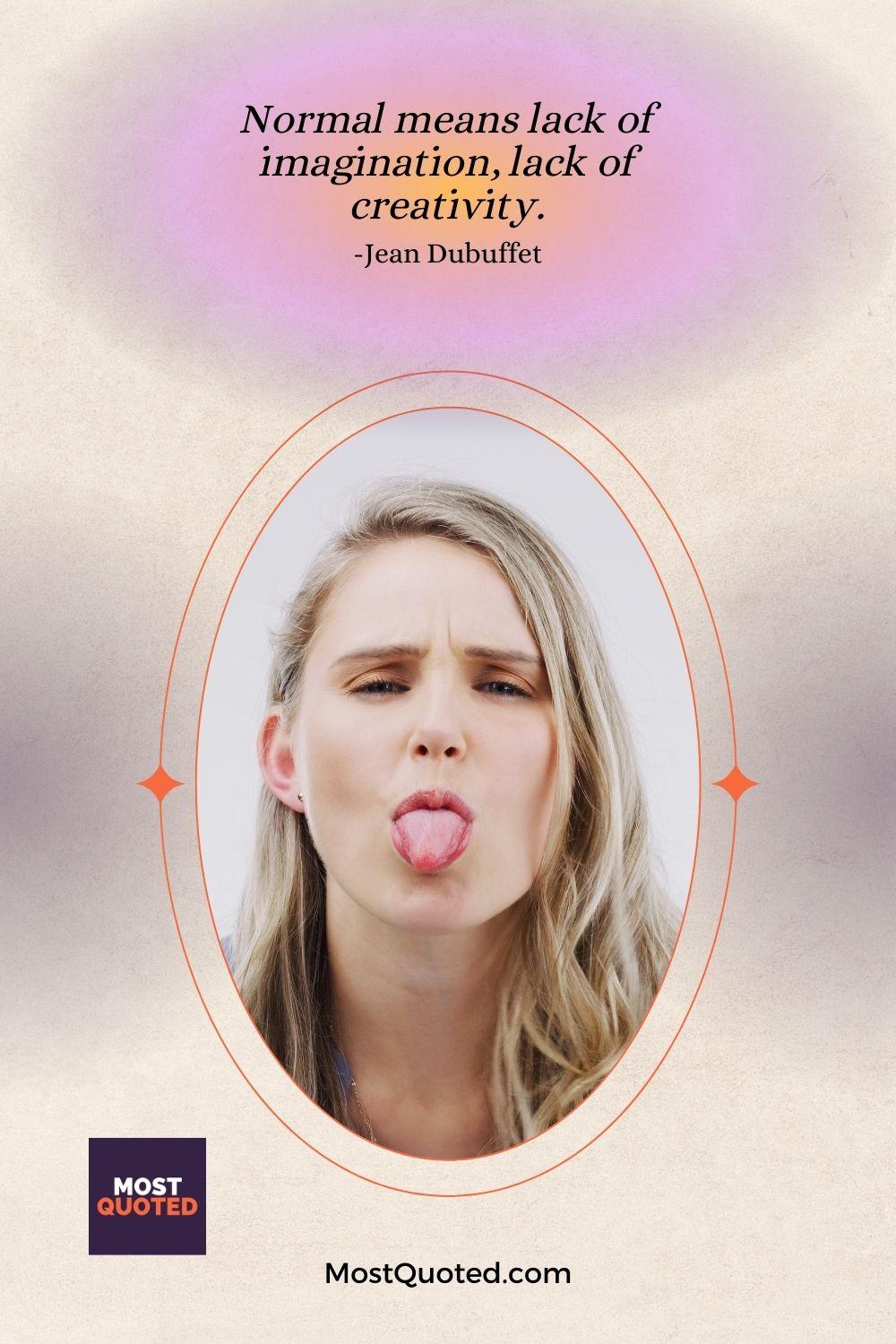 There is no innovation and creativity without failure. Period.

Being the richest man in the cemetery doesn’t matter to me … Going to bed at night saying we’ve done something wonderful … that’s what matters to me.

It’s more fun to be a pirate than to join the Navy. 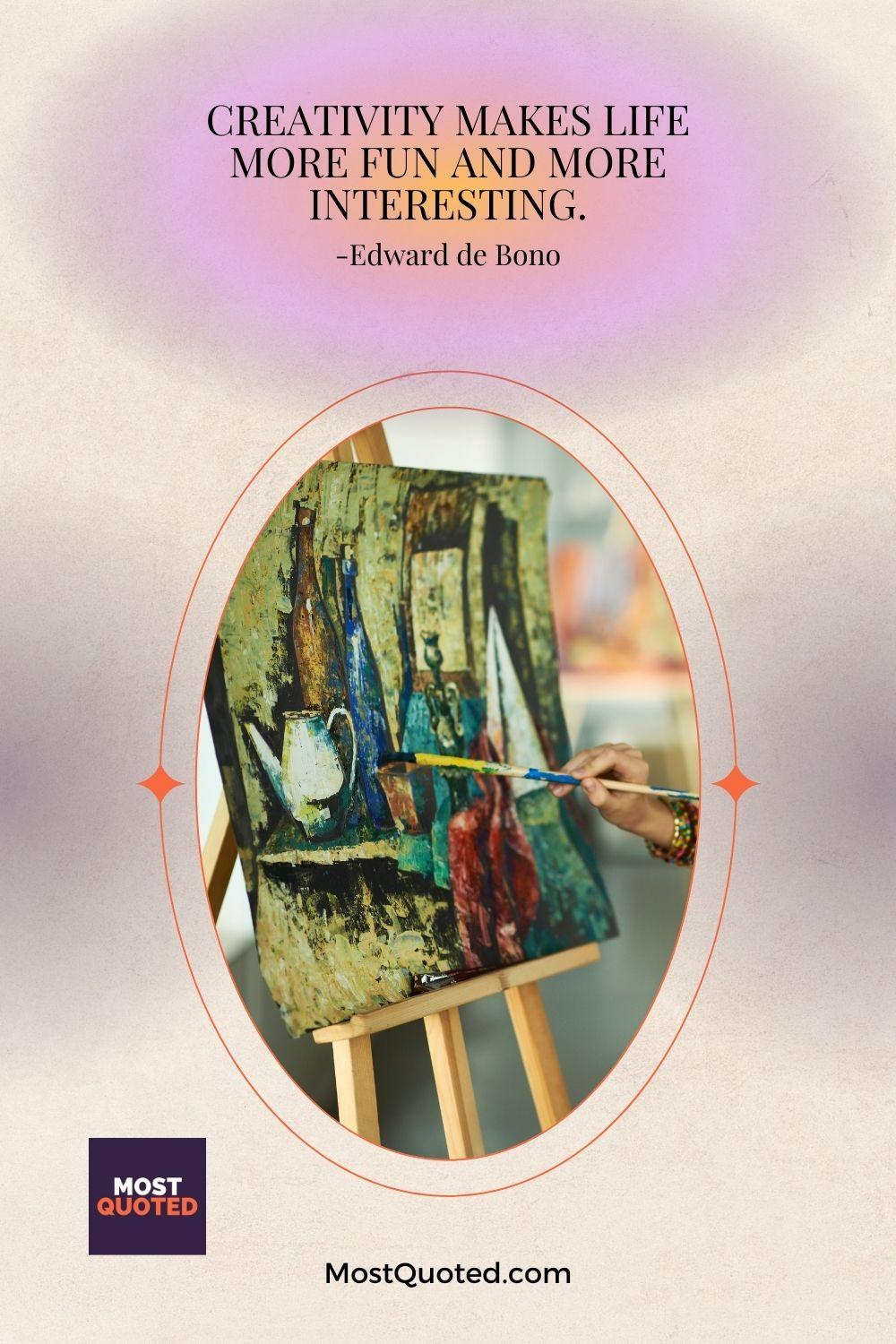 Let us be about setting high standards for life, love, creativity, and wisdom.

Without freedom, there is no creation. 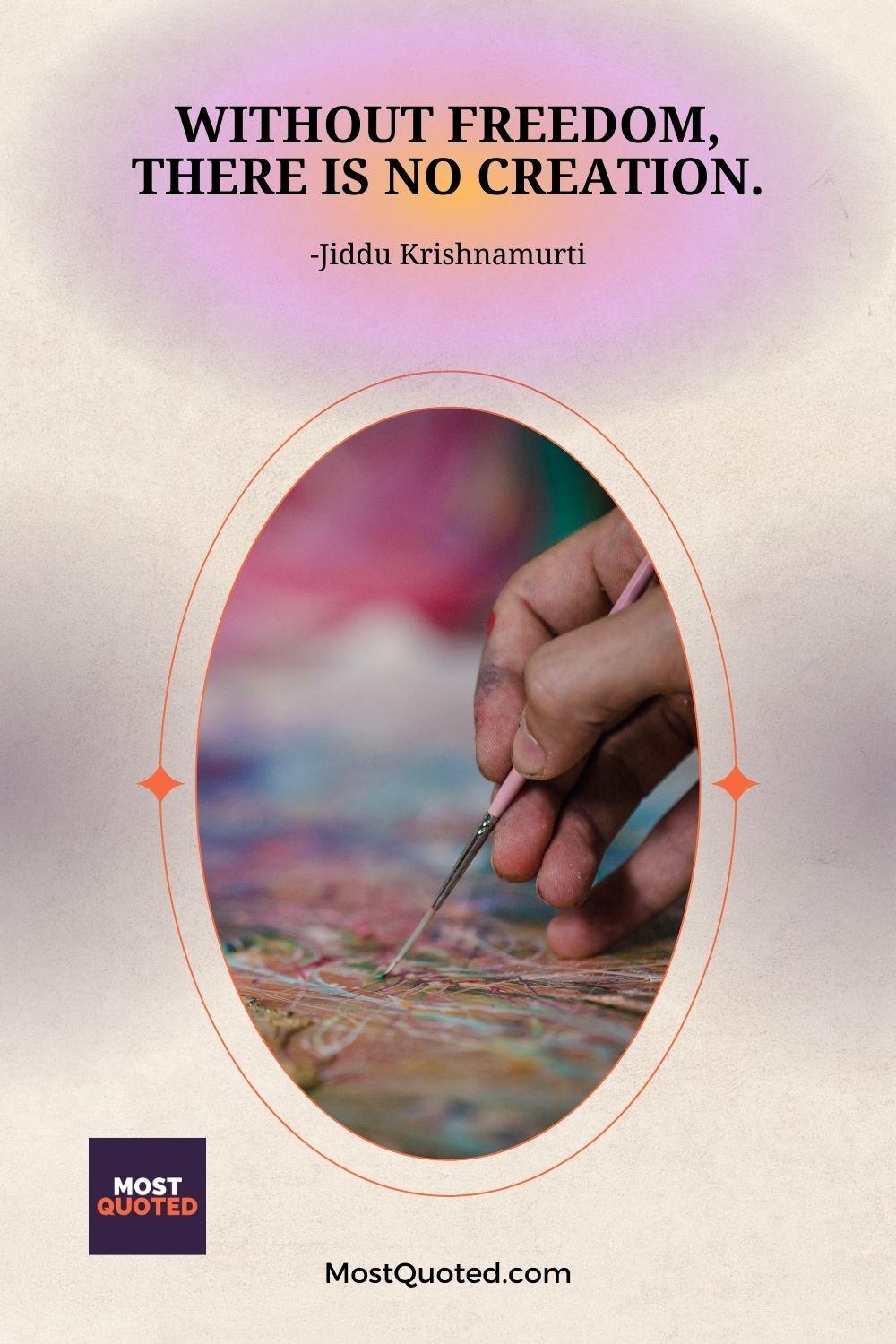 The creative person is willing to live with ambiguity. 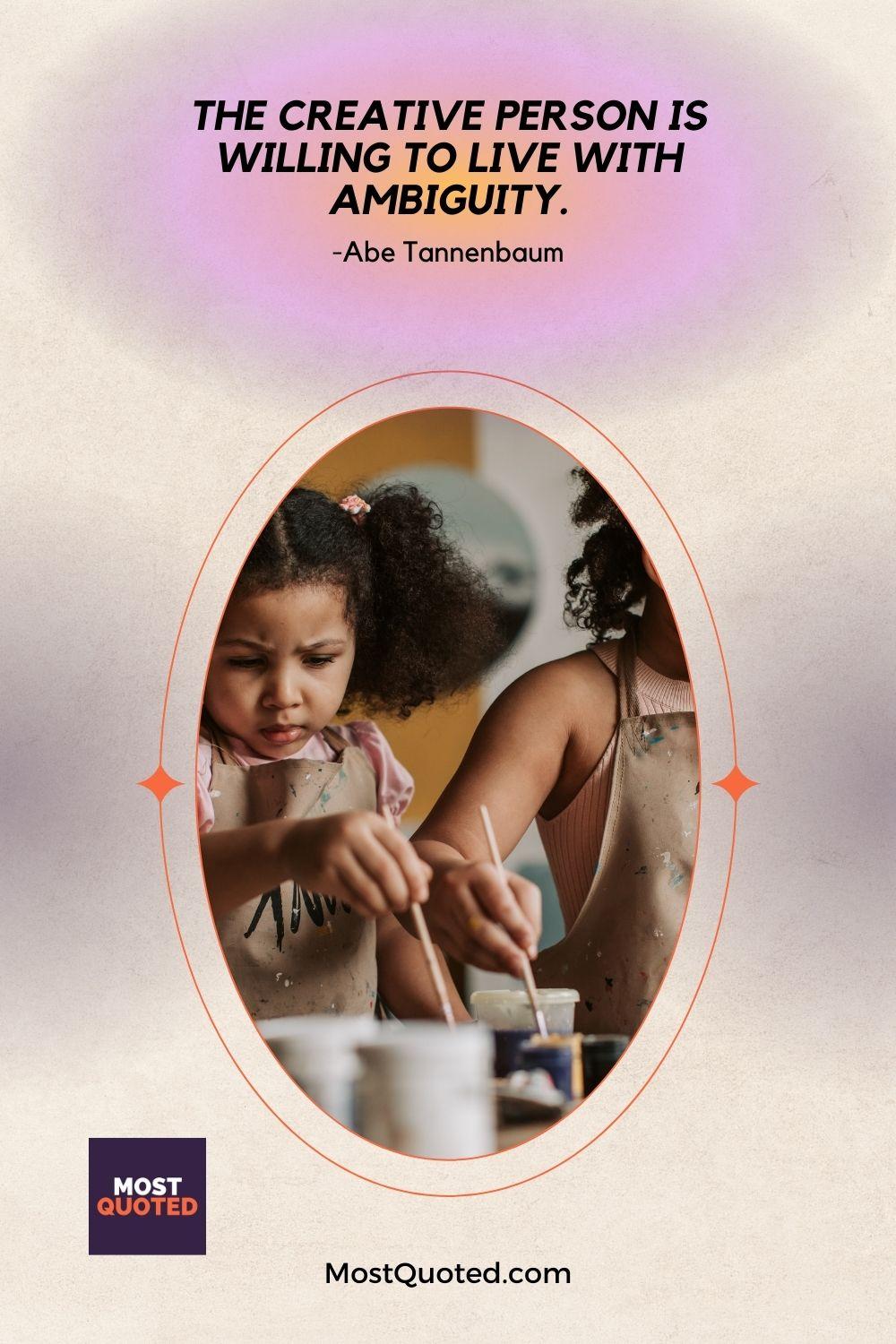 Creativity can solve almost any problem.

Creativity is the sudden cessation of stupidity.

Creativity comes from looking for the unexpected and stepping outside your own experience.

I want to put a ding in the universe.

People have a God-given right to use their creativity to produce things that improve our lives. 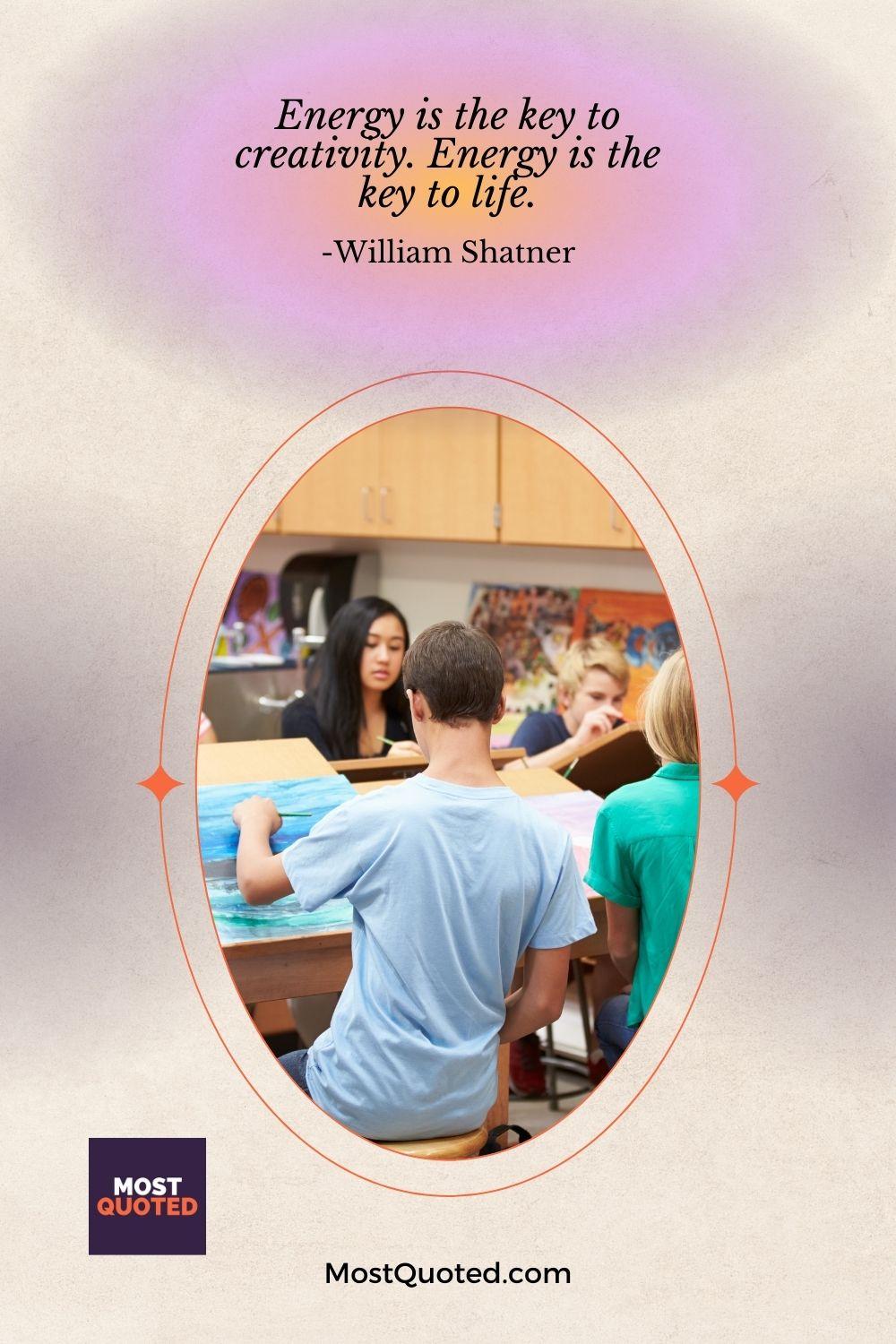 I go wherever my creativity takes me. 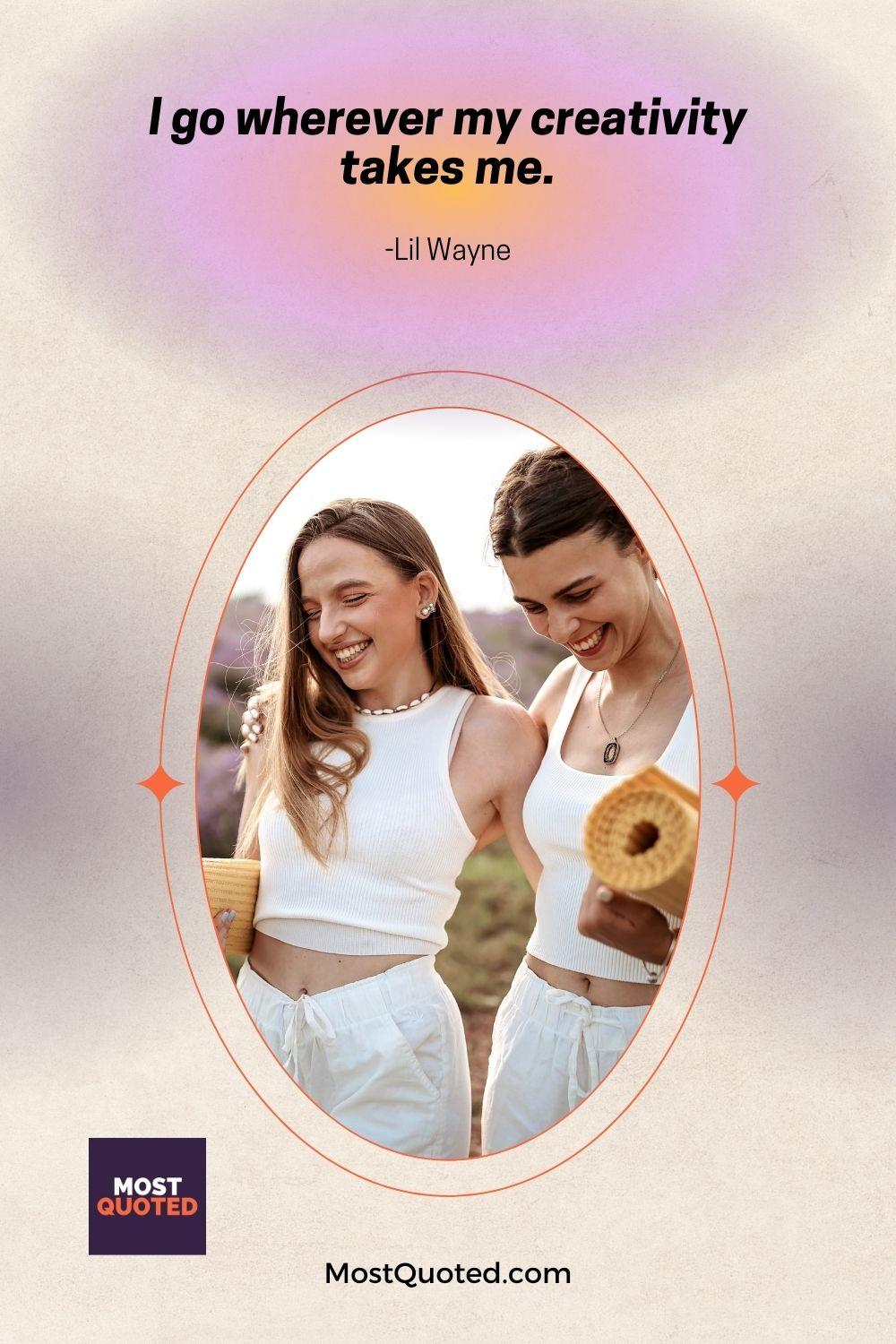 If you want something new, you have to stop doing something old.

Creativity has got to start with humanity and when you’re a human being, you feel, you suffer.

Learn from yesterday, live for today, hope for tomorrow. The important thing is to not stop questioning.

Creativity makes a leap, then looks to see where it is.

Information is not knowledge. The only source of knowledge is experience.

Creativity can solve almost any problem . The creative act, the defeat of habit by originality, overcomes everything. — George Lois

Nature is infinitely creative. It is always producing the possibility of new beginnings. -Marianne Williamson

What keeps life fascinating is the constant creativity of the soul.  — Deepak Chopra

Creativity involves breaking out of expected patterns in order to look at things in a different way. — Edward de Bono

Most Quoted is the home of sayings, words of wisdom and quotes from the most quoted philosophers, writers, artists and thinkers. In addition to this collection of Creativity Quotes, you will find hundreds of other quotes lists and collections on this site.